It has long been a bucket-list race… and despite having my “fully complete”, “no-fourth-kid-please” family now, I snugged out to South Africa for a mini race-cation, and a sub-11hr race hopefully, without riding outdoors for the last 6 months due to baby & bad winter weather.

Monday: After slugging the bike case in the subway (on an empty E line luckily), I sit down for the unforgiving 20-hr trip, with a carry-on filled with lots of veggies tonsnack on, and some melatonin drops to fight the big jet lag flying East. 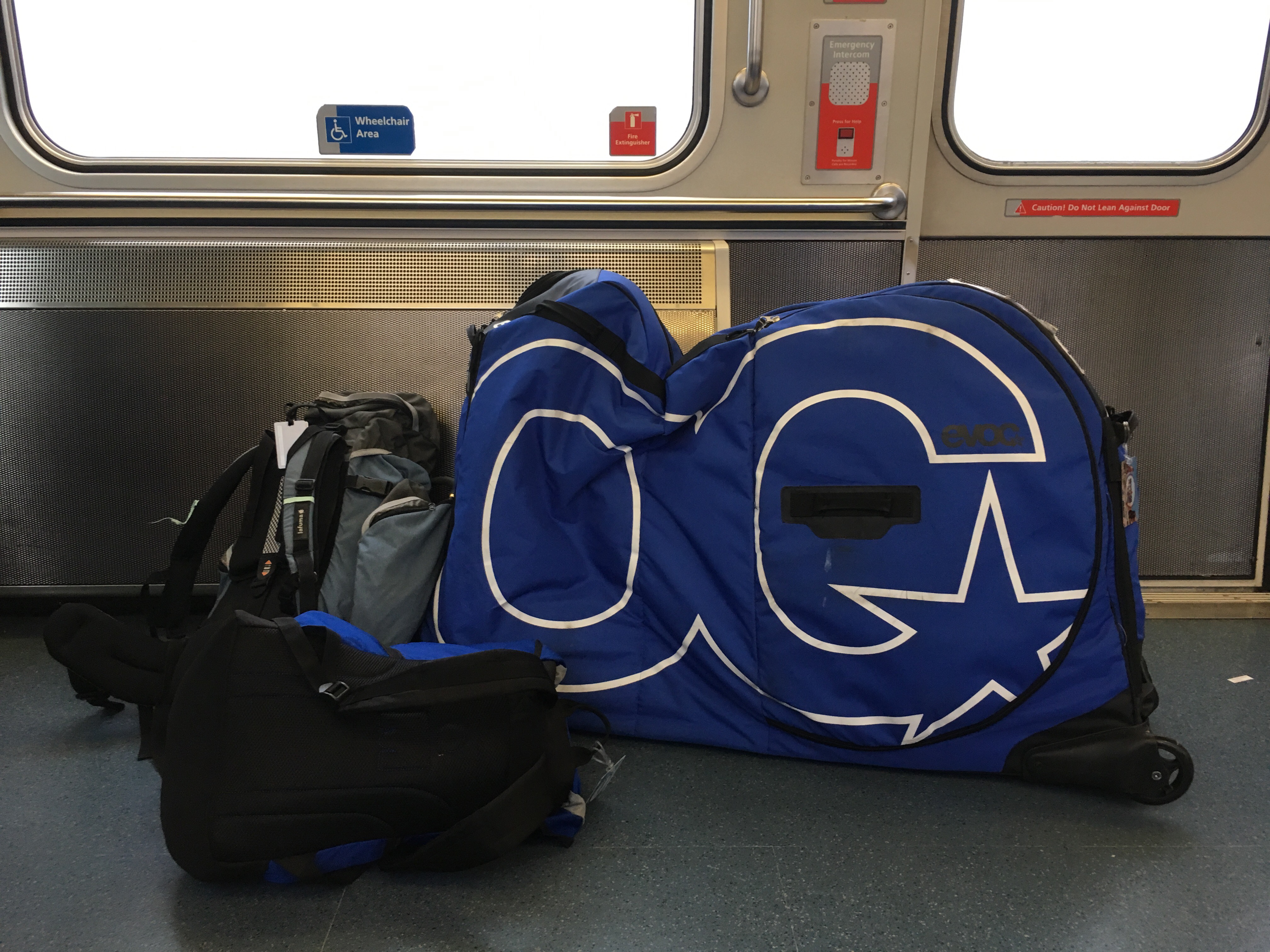 Tuesday: After dropping the bike and gear bag at the luggage storage at Johannesburg airport, I connect for Kruger airport where I get my car, and then off to famous “Crocodile bridge” entrance to the Kruger National Park! I plan to spend two nights in the park at the Skukuza camp, in a tiny hut. First day sightings: elephants, giraffes, and cape buffalos. 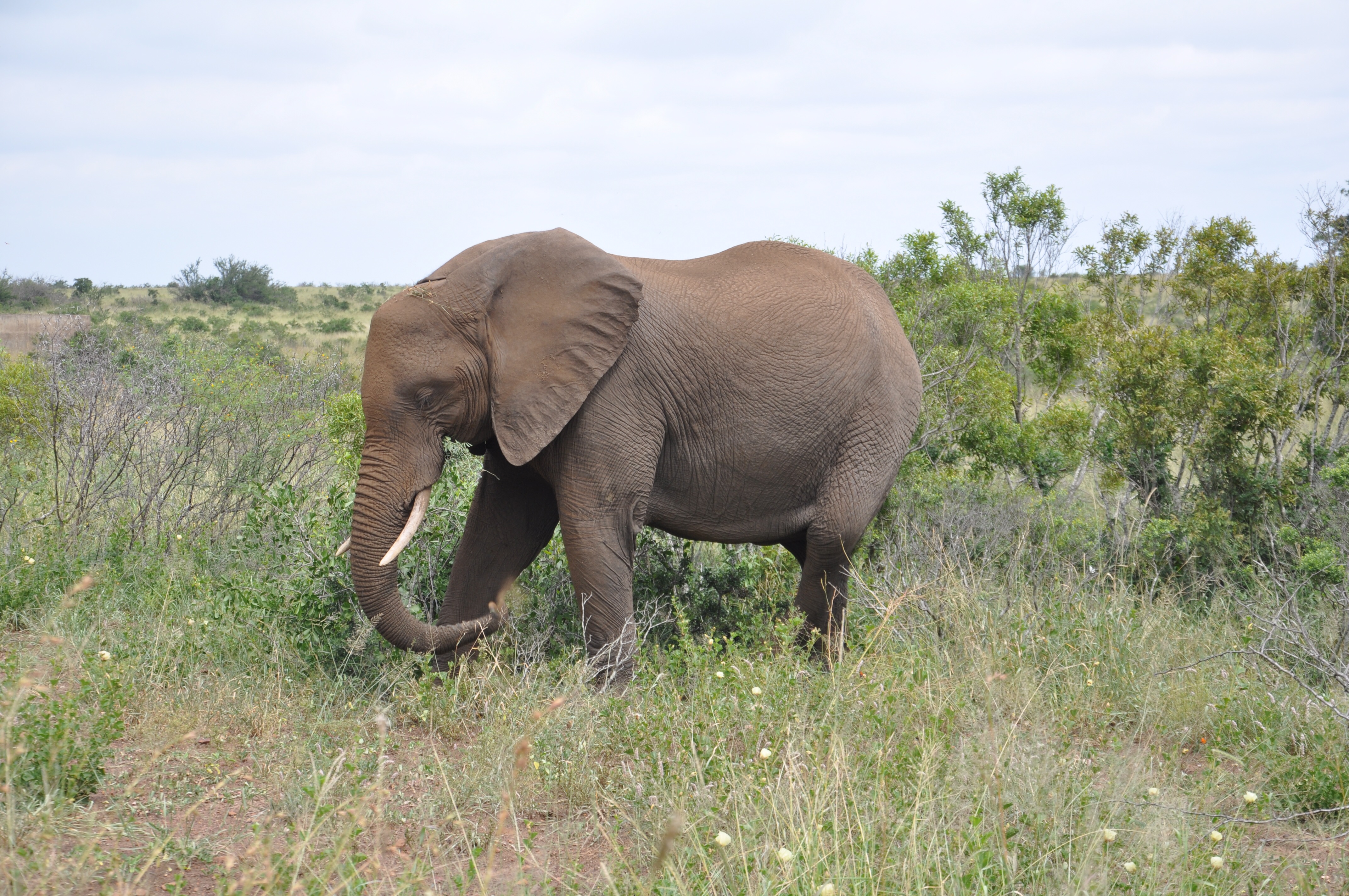 Wednesday: 4am wake-up, which is actually 10pm the previous day in New York. Jet lag kills me but I will have to wake up super early for the race on Sundat so I join a morning expedition to try and see animals when they are the most active. Get to see a leopard, and a lion that just killed a giraffe… out of the big 5 I am missing the rhino ! I the. spend 6 hours driving searching for clues of rhinos, and mostly “bump” into elephants, giraffes, hippos, warthogs, and monkeys. As I stop at Sabi camp for a bathroom break, some people discuss rhinos they saw the day before … 150km of dirt roads away from there. They come often to Kruger, and tell me: ” go near Berg-en-Dal and you will see them !”. Three hours later, I indeed see two of them … magnificient animals … I rush to get back to camp before sunset … I have spent close to 8 hours s in the car ! But totally worth it … 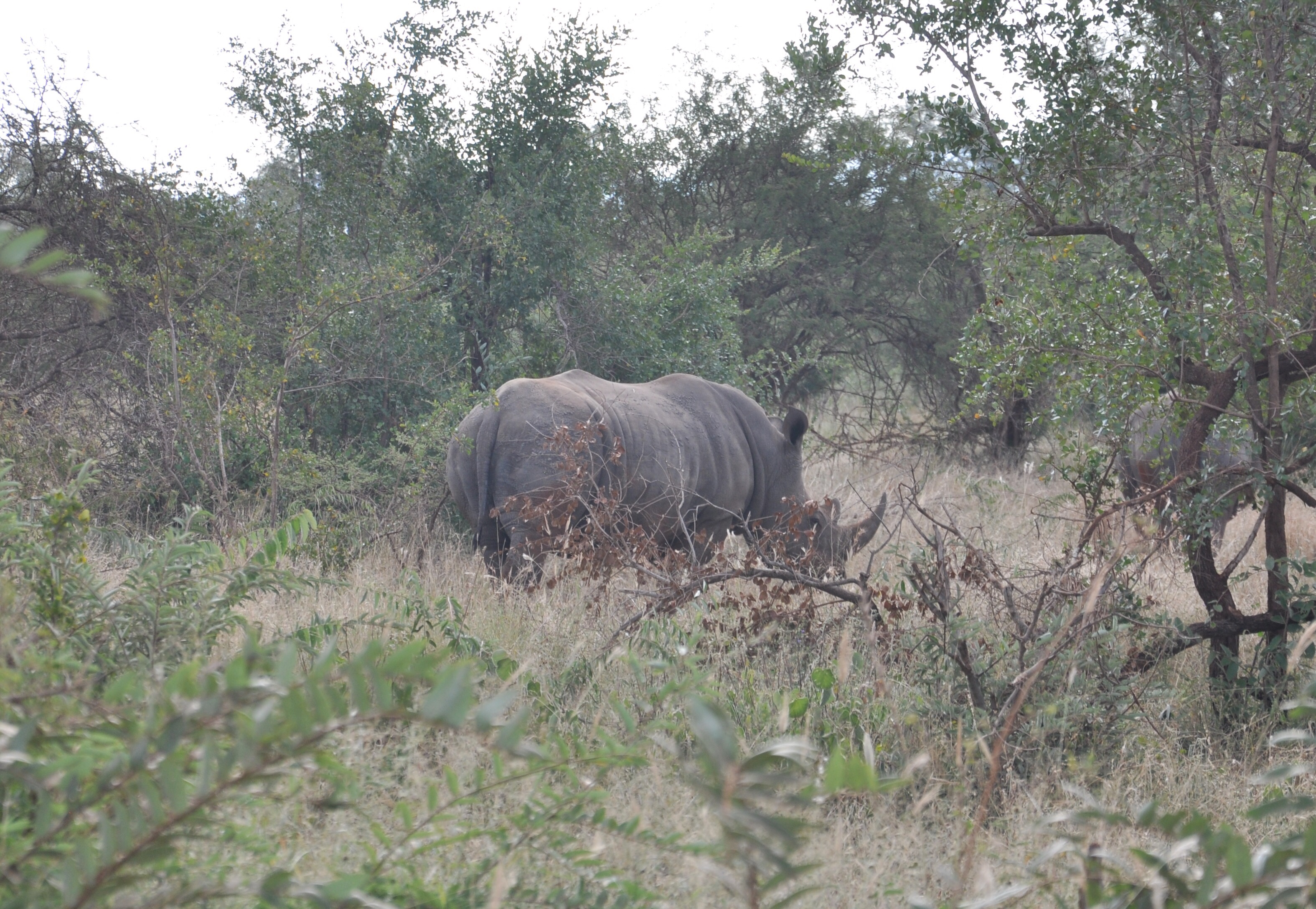 Thursday: Again on the road at 5am to catch a flight to George on the coast, via Johannesburg where my bike elwaits me me gently… I land in George at 2pm and drive the 400kms of the Garden Route from George to Port Elizabeth … mountain views, steep cliffs, gorges, waterfalls … I arrive in Port Elizabeth at 7pm, quick exhausted but have caught a beautiful glimps of South Africa already. 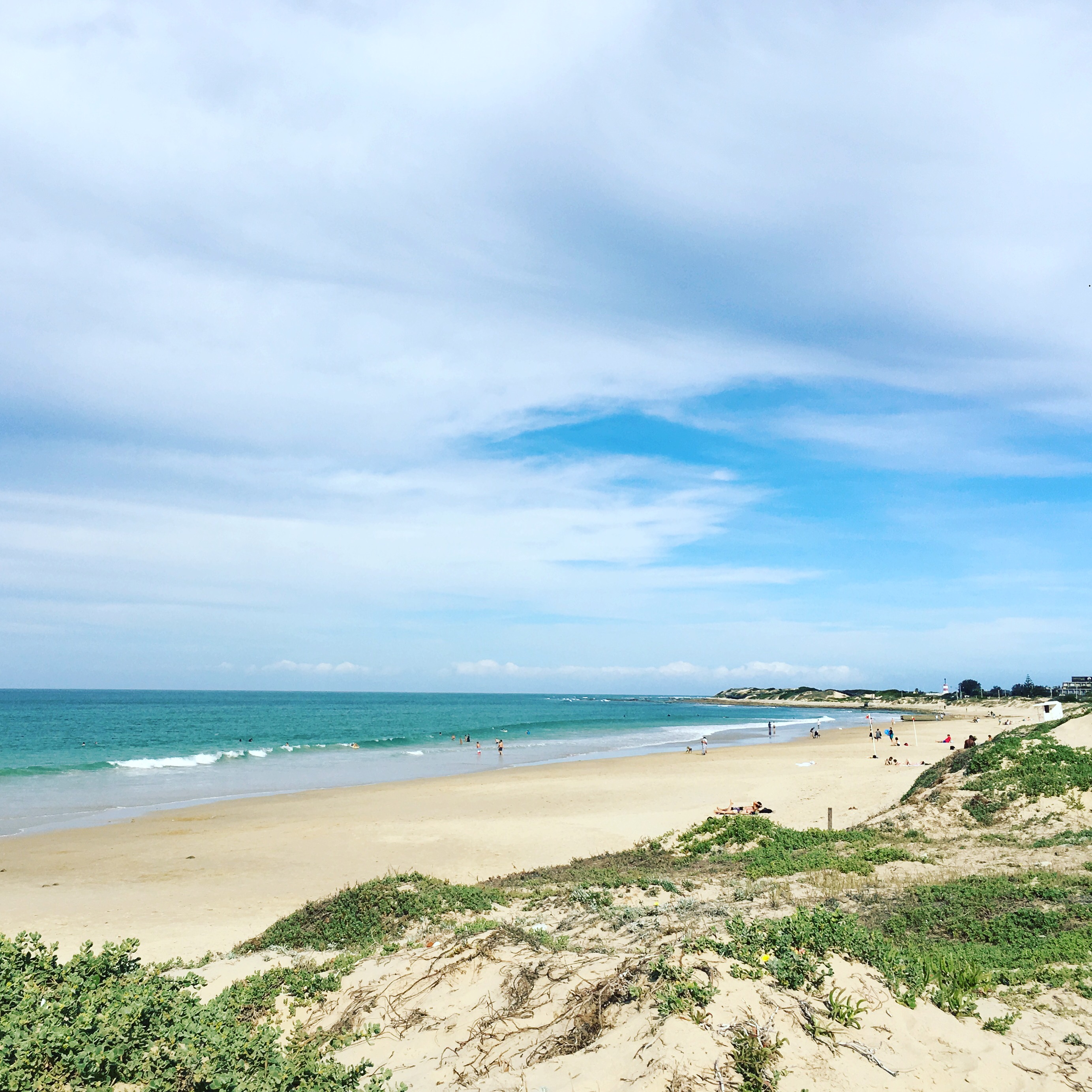 Friday: I relax a little in my hotel (Blue Radisson) P.E., get my race number at the expo, everything is very well organized. I re-assemble my bike … and my seatpost screw breaks inside the frame … not good. I rush at the bike maintenance booth at the expo … and these people simply save my race ! I get a quick swim in, water is cold … 19c …. definitely wetsuit legal. And it is going to be windy … 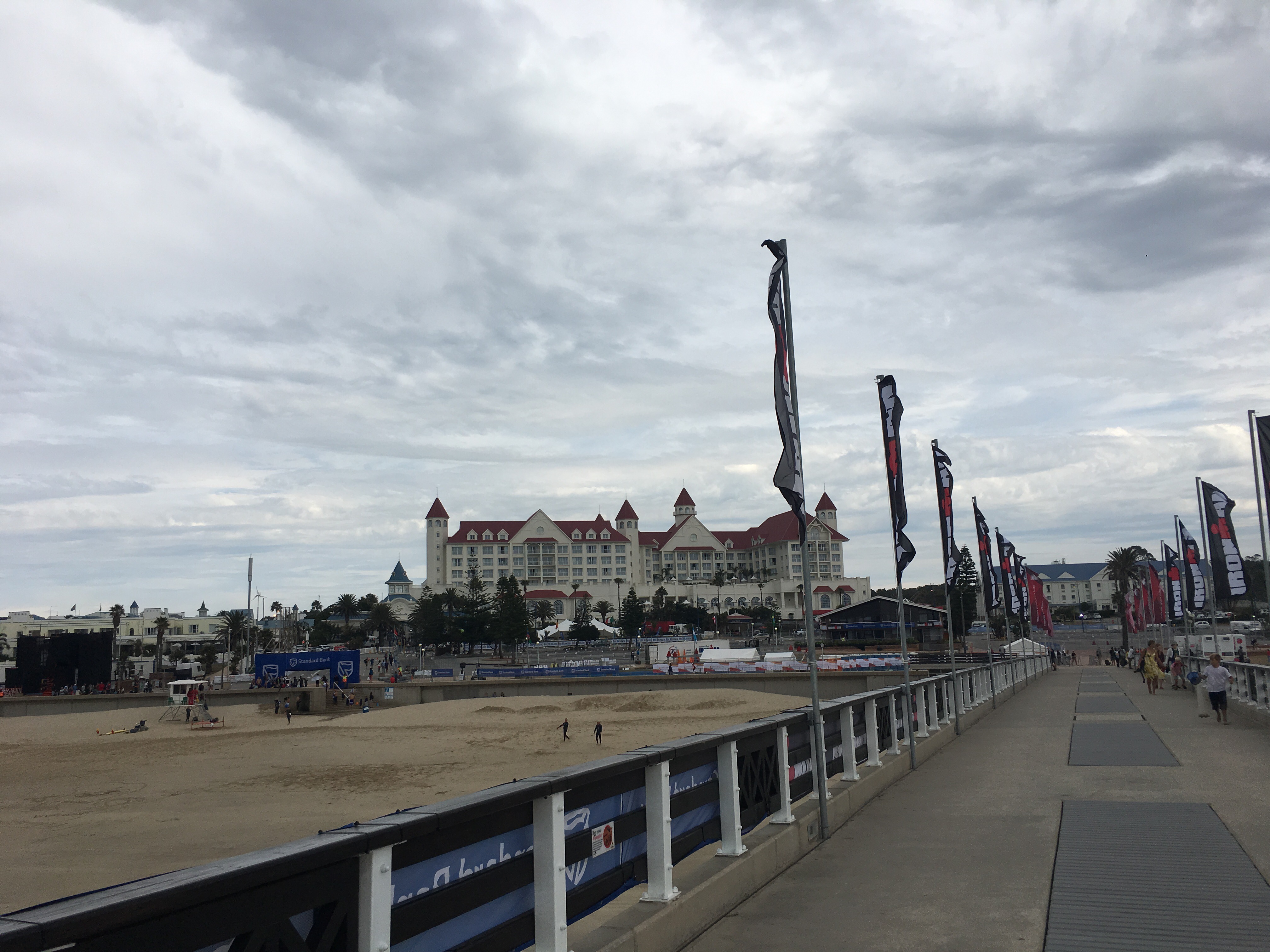 The day finishes with the race briefing with some interesting information like the fact that tri tops must be closed above the sternum, or that littering is an automatic DQ (which is a great idea I think). Paula Newby-Fraser and Greg Welsh

Saturday:  your typical pre-race day eith a fantastic breakfast at the hotel, a 30mn bike ride to check the gears, a 15mn run to get back into pace, wandering along the beach, and a super good veggie burger at beach restaurant “Something Good”. 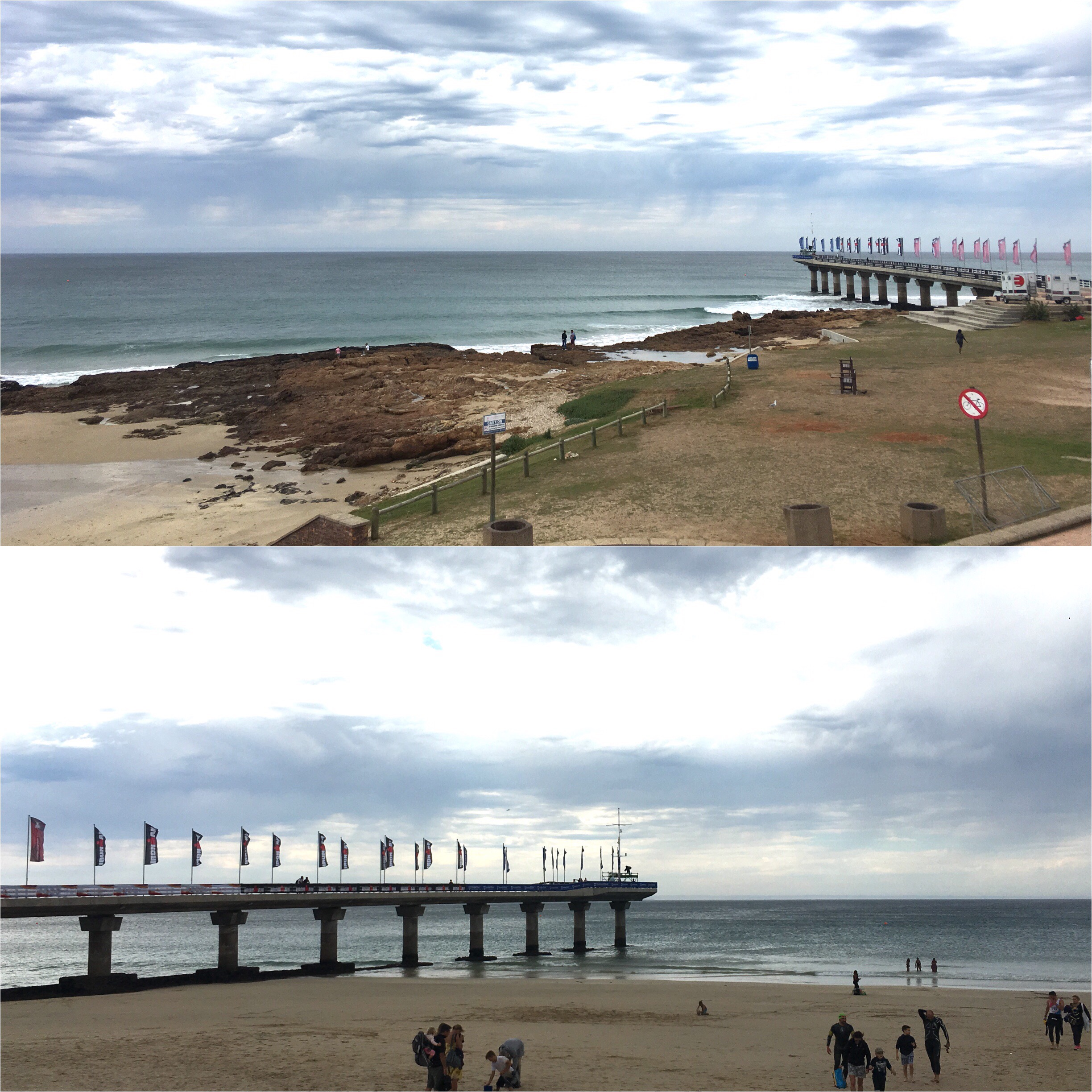 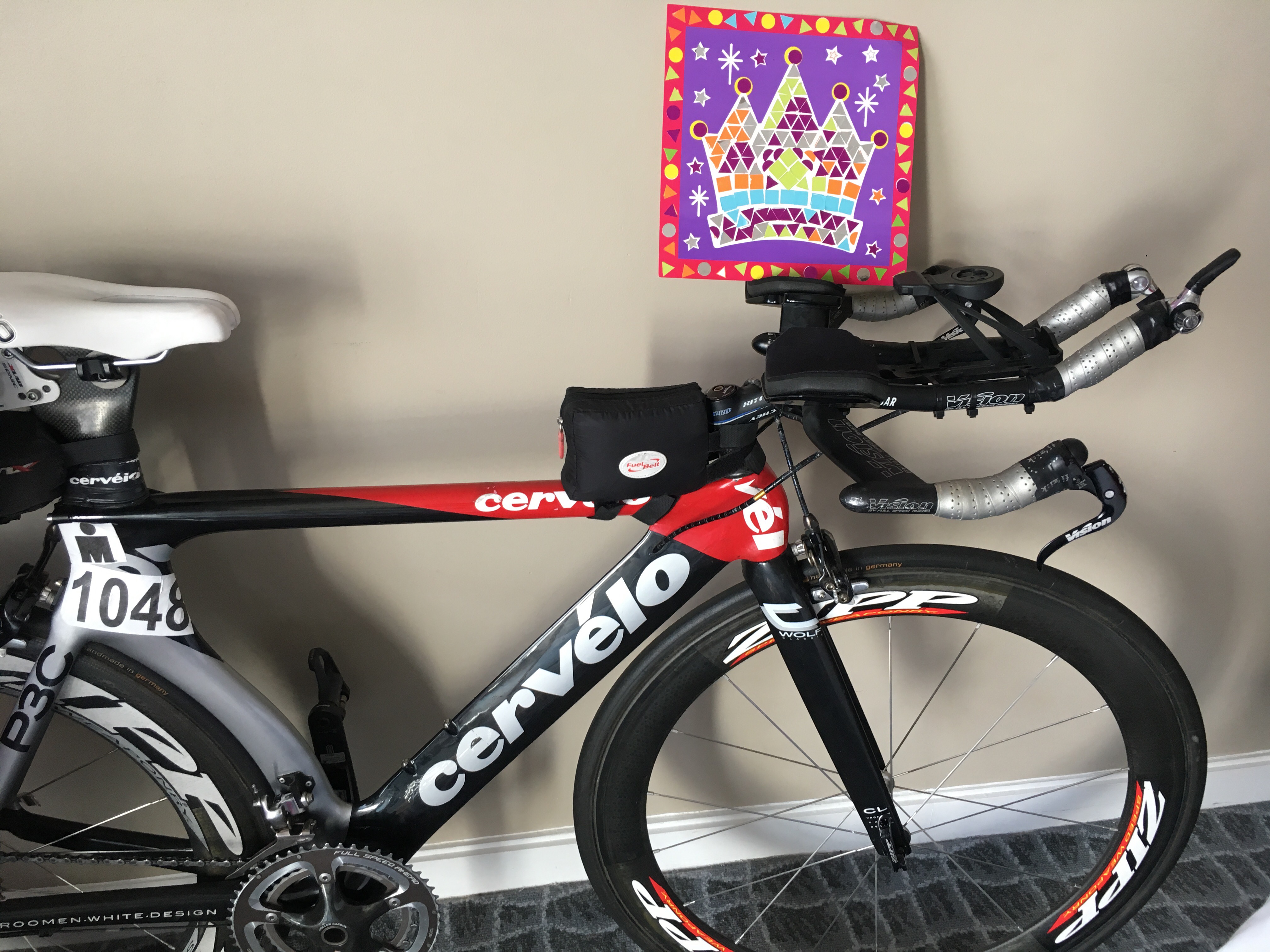 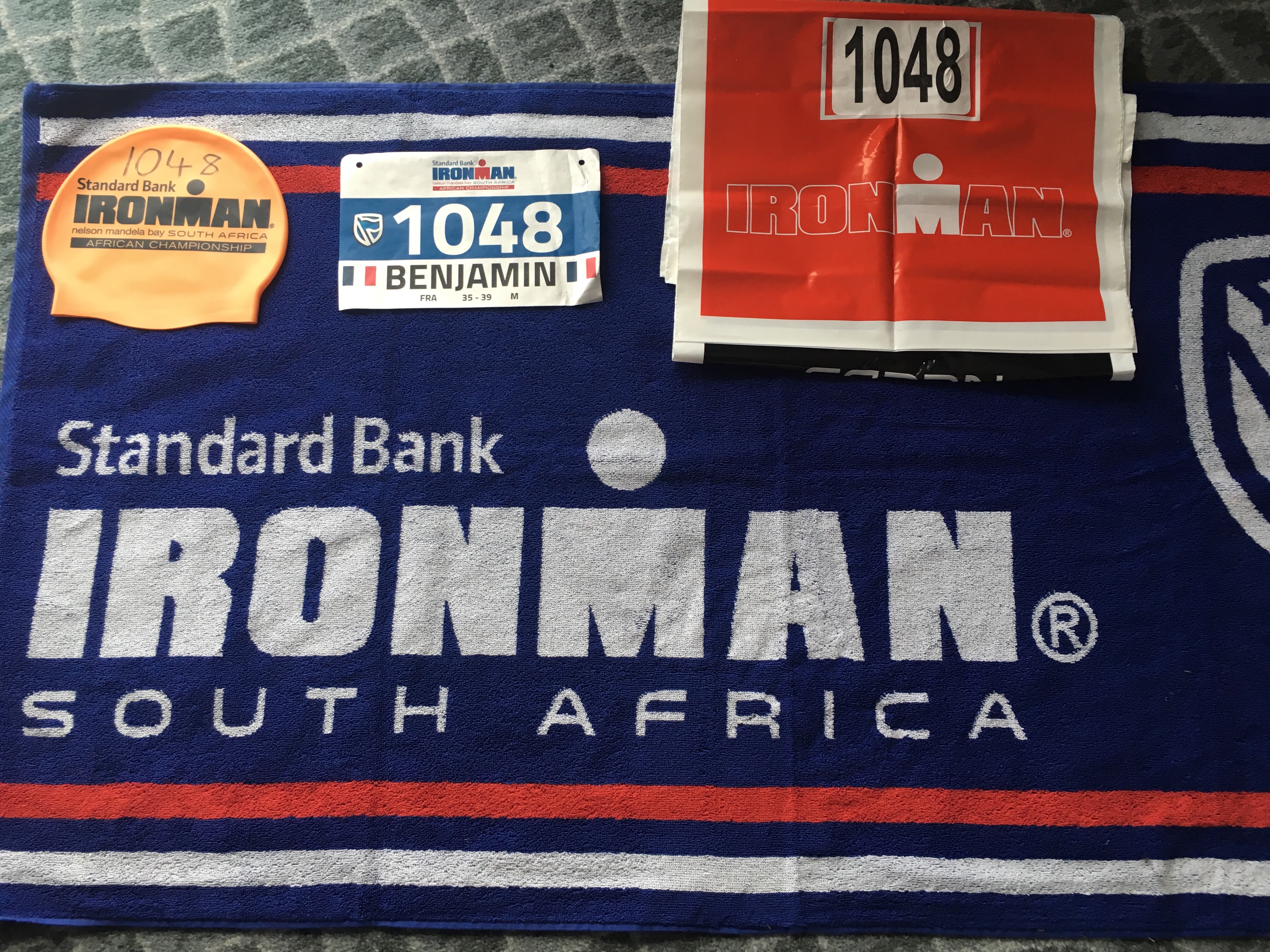 Wake up at 4.15am, and head down for breakfast offered by the hotel, which was an excellent idea as it allows me to enjoy excellent food as opposed to force energy bars into my stomach ! Leave at 5.15am, looking for the shuttles supposed to bring us 1 mile east to the start. Well, some athletes had already waited for 15mns and most people were walking, which was the backup plan. One lady athlete convinced the hotel to take a car and drop us off … it works ! We then see an official shuttle … basically a 9-passenger van with 15 athletes inside. And there are more than 2,000 participants ! Anyway at 5.40am I am in transition
For once I had already all my food on the bike, and tires was pumped the evening before, so I just put my bottles and I head out to the porta-potties (no one, and cleaning staff were cleaning them between each athlete … best race start ever !). Then change into wetsuit, and on to the beach. Only big issue is that we were not allowed to warm-up. Pros go at 6.30am, and we age-group athletes go at 6.45am. As I swam 1hr01mn in Frankfurt last year, I go with the 1hr group, however I quickly face a leak in my googles that force me to swim blindly. Added to this are the large waves to make the markers / buoys difficult to see … I essentially zigzag eyes half closed the whole swim, stopping sometimes to get my bearing. Due to the seeded start, swim is not crowded but it means you can’t just follow a group. Or dolphins. I feel relaxed but have to stop every minute or so to assess the direction given google situation. I hope to still swim 1hr05mn or something… so when I reach Hobie beach after 1hr 14mns I am hugely disappointed…
Transition is long, as we have to run a lot with the bike shoes. I hate that. I stop to gwt plenty of sunscreen, as the sun here is very intense… best minute wasted of all the race ! Miss my rwck, can’t find my bike (yes, happens) but ultimately exit T1 in 7 minutes (ouch), which means my target of sub-11hrs is already closed to 15mn behind ! Grrrr. 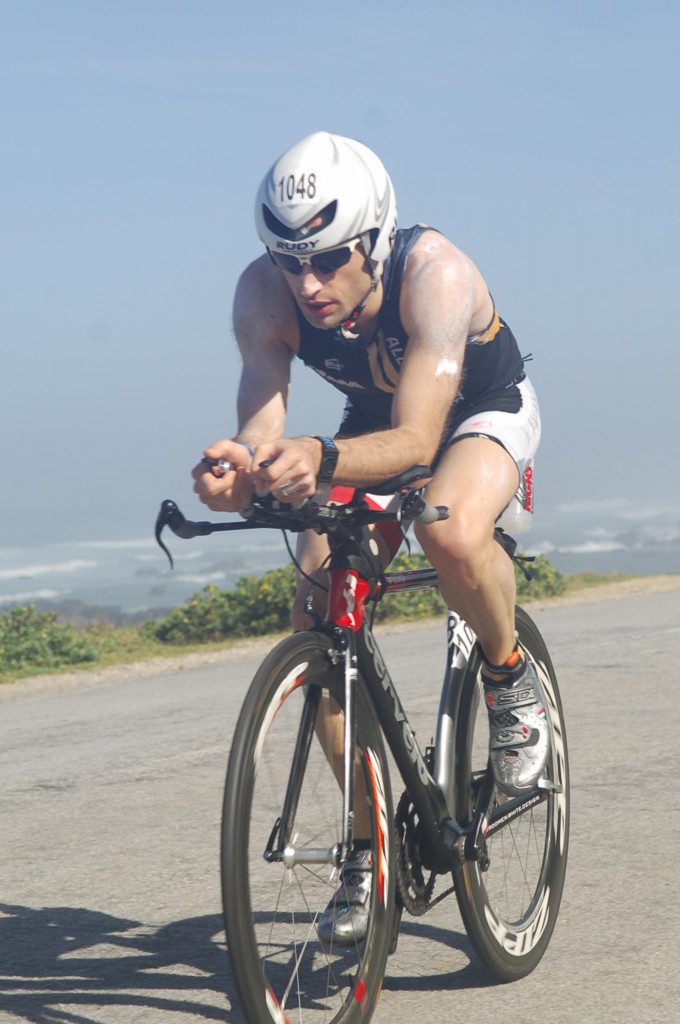 The last few days were super windy – again, this is called “the windy City” and I remind you that all the shipwrecks around Cape Town and Cape Hope prove the is a strong competition for this title in South Africa ! Roads are rough, but wind is not as strong as I feared, the 2-loop route is incredibly scenic. I reach the turnaround point (28 miles) in 1hr 23mns, and am a little slower on the way back, taking it easy on the hills.
At the turnaround point back in T1, I clock 2hr 49mns for 56 miles, slower than expected as I usually lose steam on the second half of the bike. I wisely loose 1 mn to get my sandwiches at the special needs aid station, as so far my nutrition is going well. I think it is because they don’t offer gatorade but a UK drink called High5, which my stomach much prefers. I also get some sunscreen, as I hate sunburns! So it sets me back a little, but I feel good so leave with the objective of completing loop 2 at the same pace. 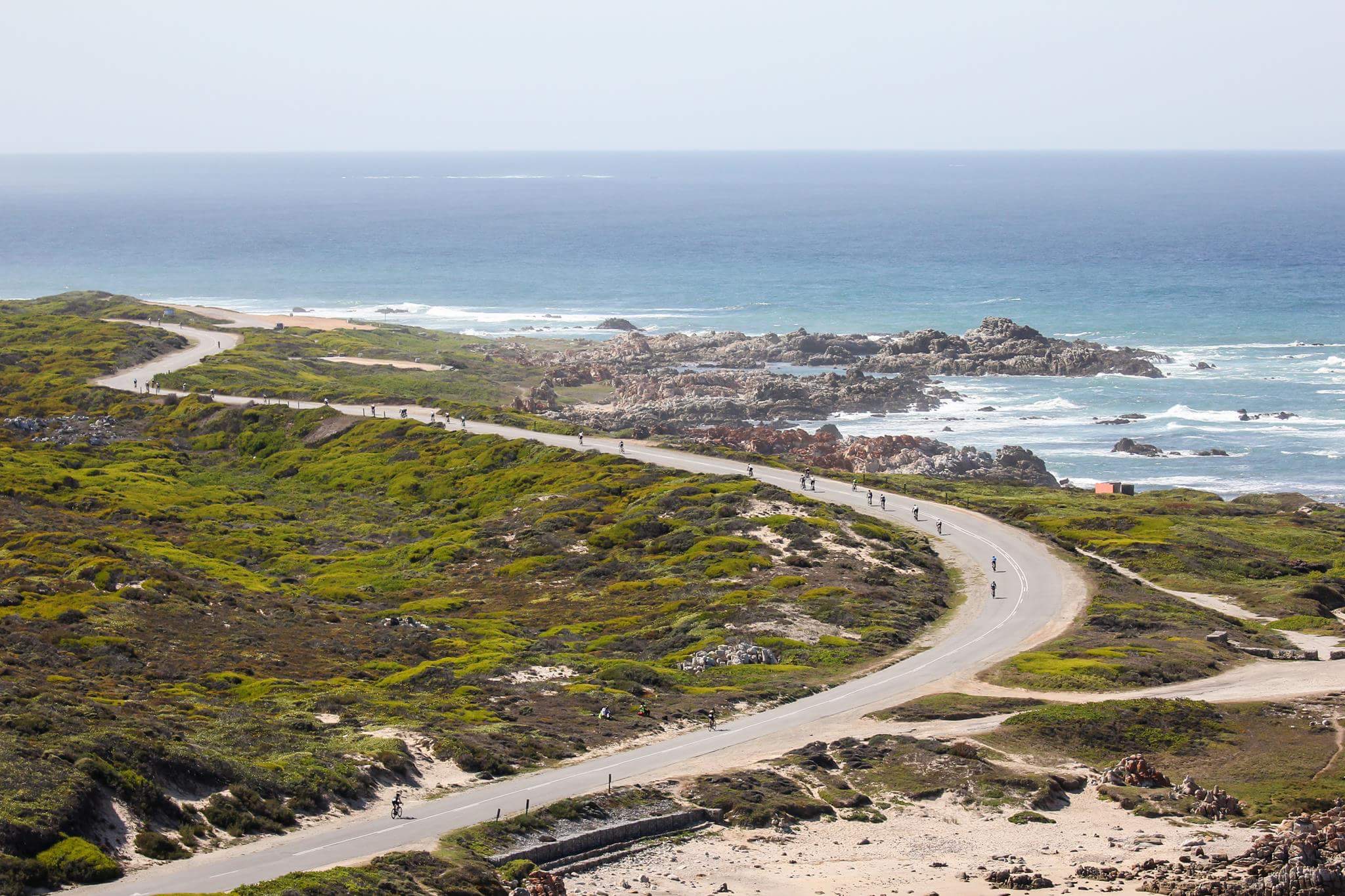 Going west for the first part of loop 2 is slow … wind has picked up and I can’t ride fast enough without pushing much harder. I still enjoy the incredible coastal route, and enjoy for the first time in a long time good energy level and a stomach accepting food all along. Turn around point, less than 30 miles left, I decide to accelerate a little, plus this is the faster section (or so I hope !). I manage to make some time over my “worst case target” of 5hr 50mn, dropping the bike in 5hr 42mns. 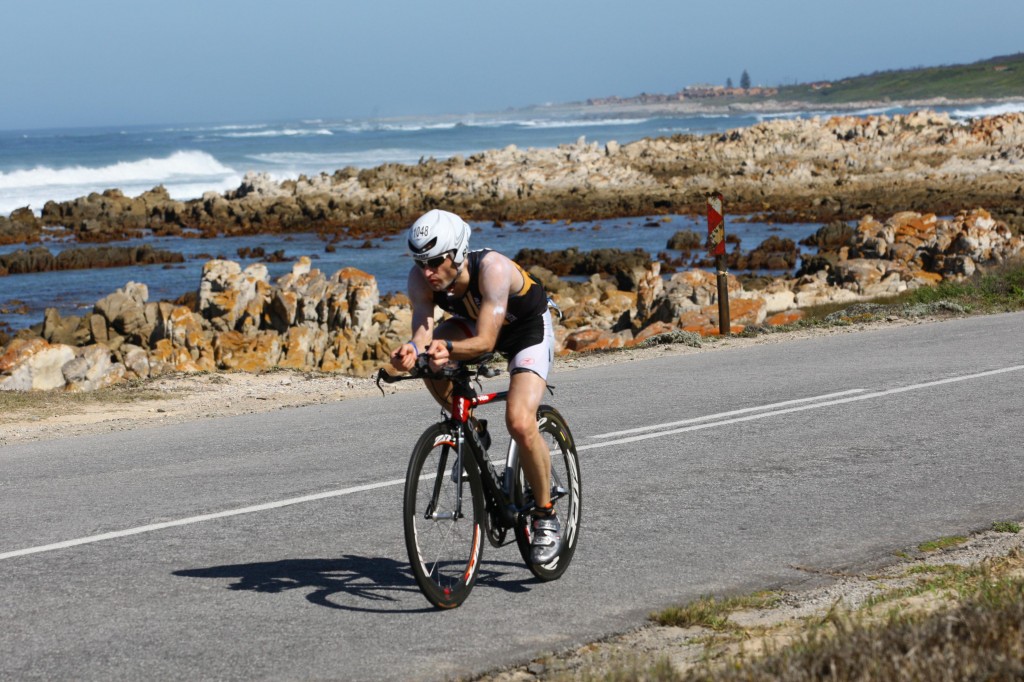 Again, lots of sunscreen, new trishort, new socks, and off we go.
Main problem: to go sub-11 I need to run the marathon in 3hr 50mn … and it’s hot. Like super hot.
So I think for me the ironman marathon – after a reasonnable bike – is moatly nutrition (on the bike) and mental (and the run). My nutrition went super well so I know it will come down to not let the pain make me suffer and give up. Meaning walk or slow down.
After a couple of fast kilometers, I settlle into a pace of 5mn per km, with a simple fueling strategy of a glass of coke every two aid stations. Plus tons of water on the head to cool down. I promise to stick to this until km10, where I would allow myself the luxury of moving the ankle strap for the timing chip that has been hurting me since the end of the bike. Little things … For the second 10km, I manage to totally occupy my mind without effort and move at a 5’15” pace. This is really a breakthrough for me as I manage to “unplug” my brain and not really notice the pain. 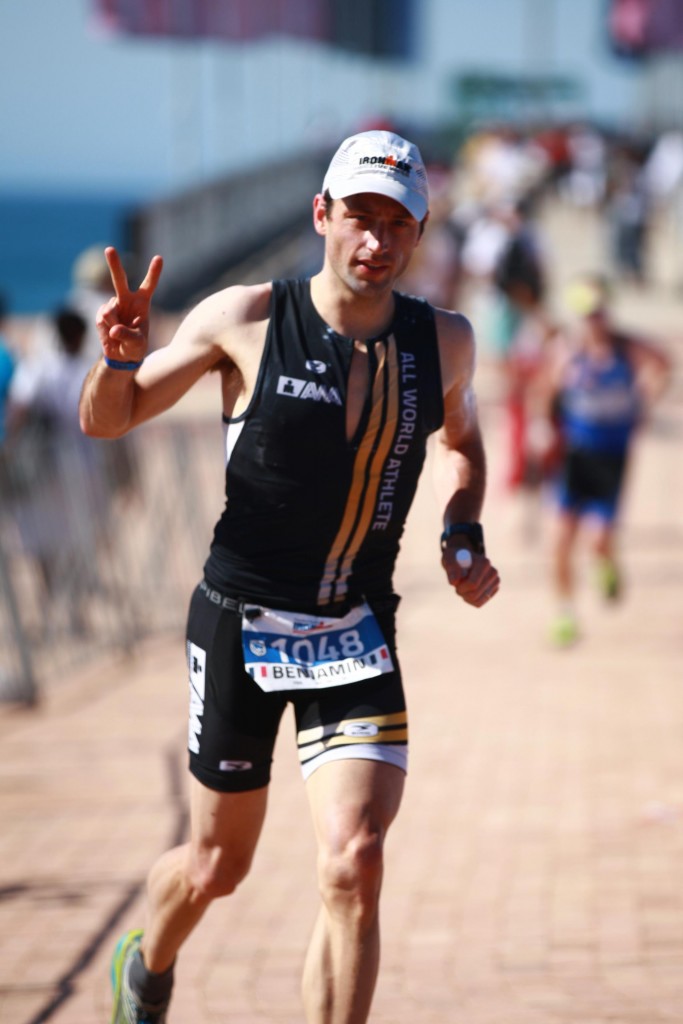 As I close the first half-marathon, I calculate that a 5mn30s / km pace i.e. 1hr 55mn half marathon will put me below 11hr. I decide to go for it and implement the same technique, i.e. occupy my mind with pleasant memories, self congratulate me for each kilometer done below target, and allow for self-congratulation when I bank enought time to reduce my pace by 15s per km. Well wind has picked up and one direction of the course is definitely faster than the other, however I save close to 2mn on my target on that lap… and start the last loop. I know deep inside that I am good, but still push myself paychologically until km35. I pass so many people struggling … now the sun is going down and heat is less of an issue … but attrition starts to hit athletes as we get closer to 11 hours of racing… 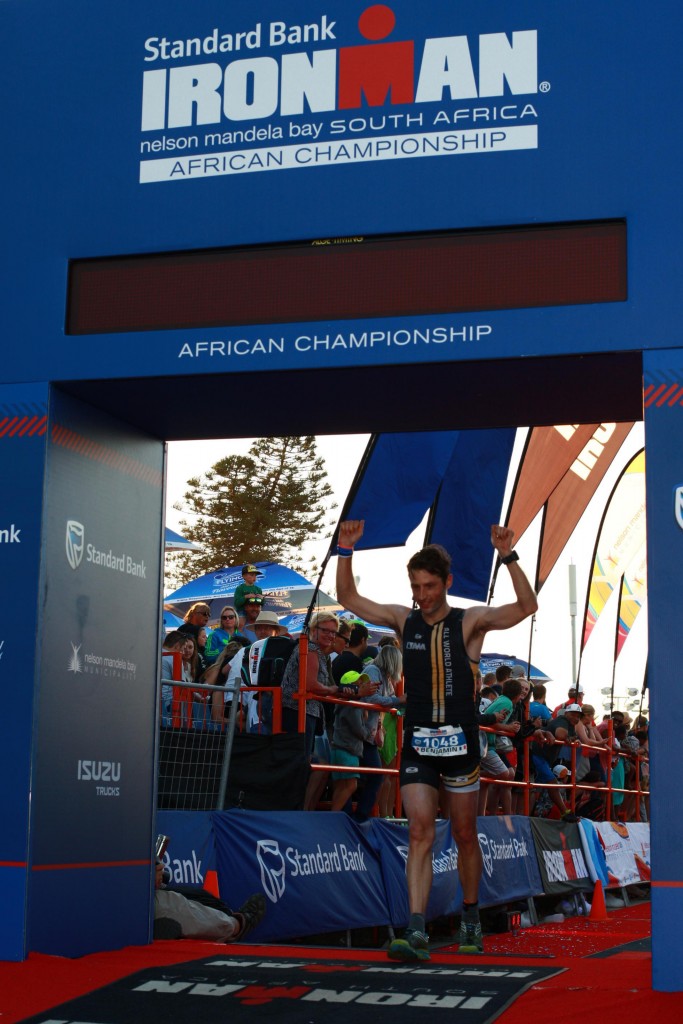 On this last loop I absorb the energy of the spectators, still incredible, and as I turn at the top of the last hill for the last 3kms, I know I am coming home … After my last four ironman races which were a strong disappointment, I get the satisfaction of a good run in 3hr 43mn in the African heat. And despite a bad swim and an average bike, I reckon that this is my second ride outside of the year (NYC winter!) and that I have a 3-month baby at home … I am joyful and relieved on that red carpet … 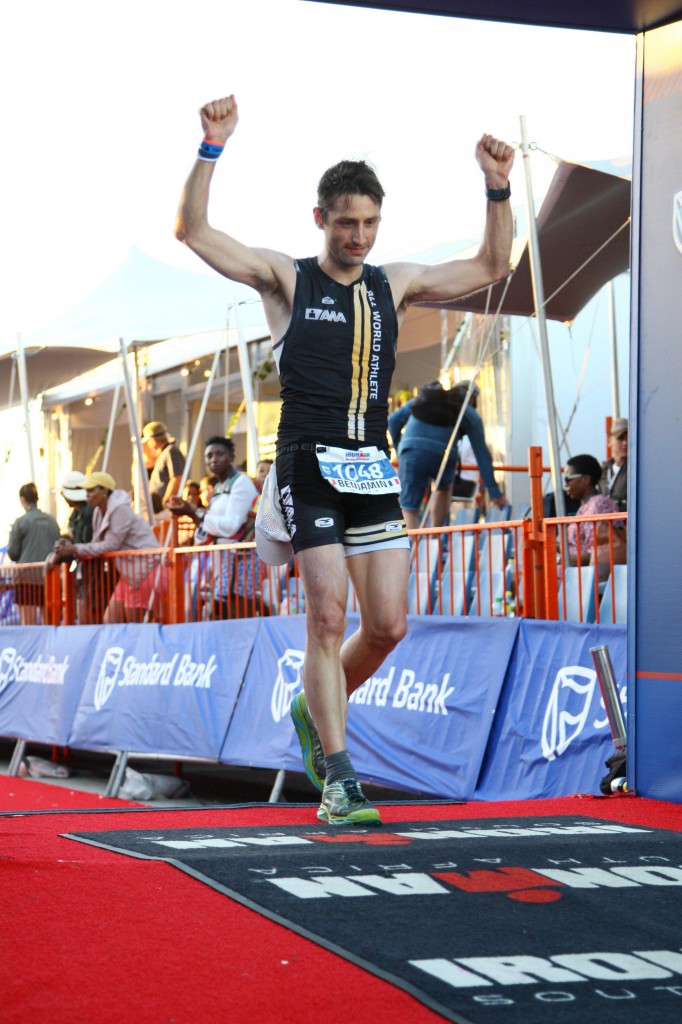 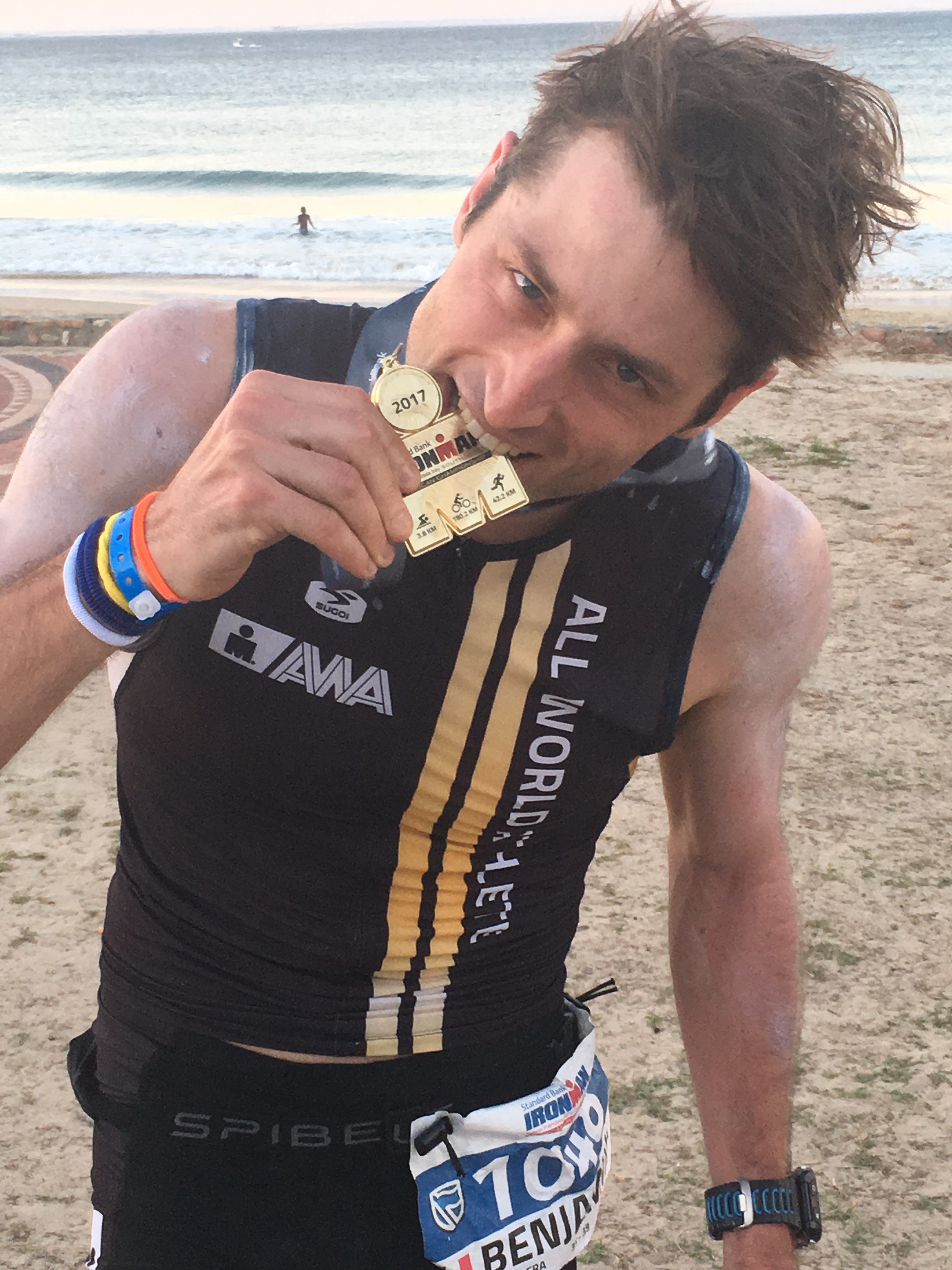 What I’ll remember are the stunning landscapes and the incredible spectators’ support on the run. 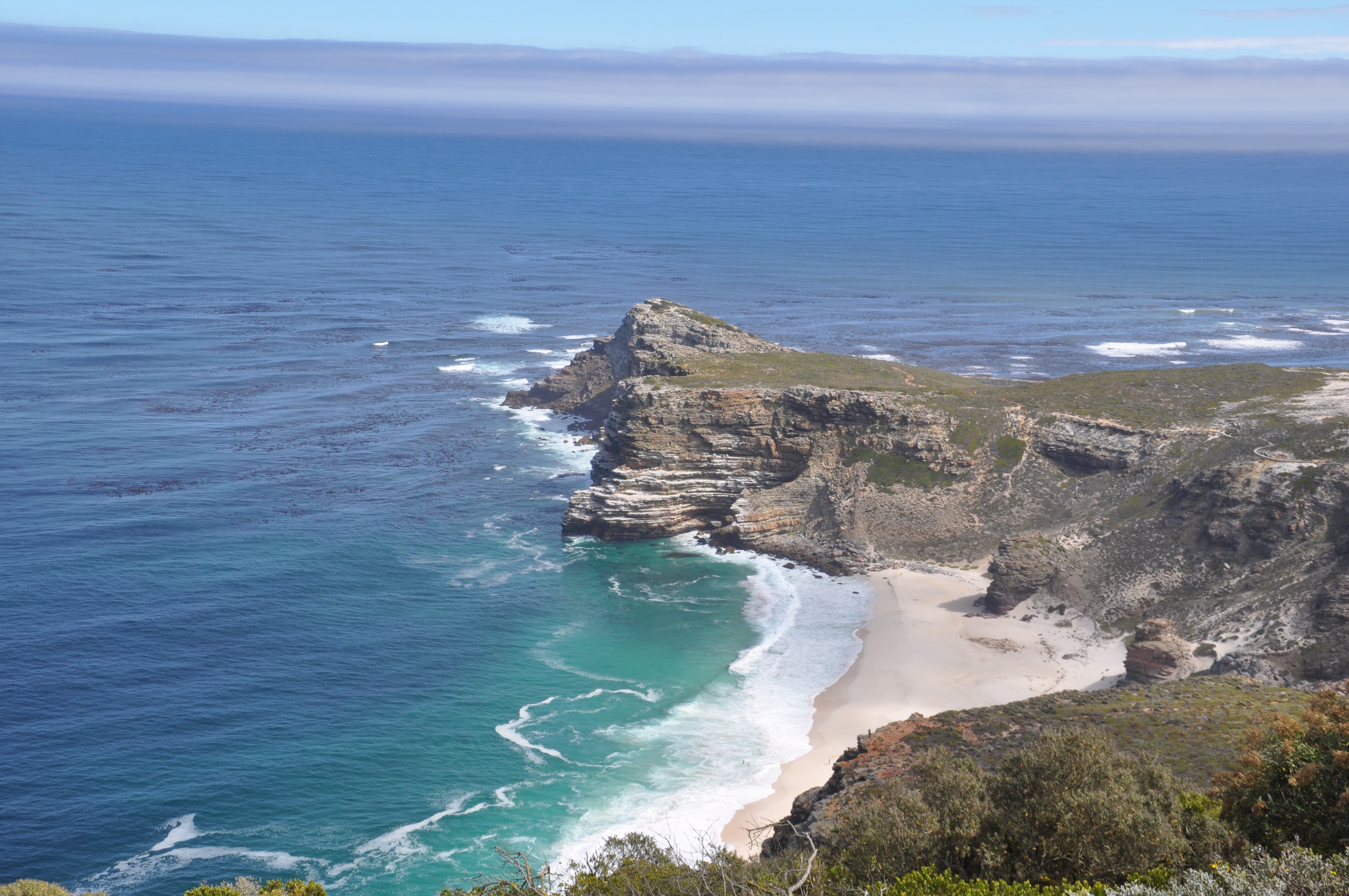 Now off to Cape Town … 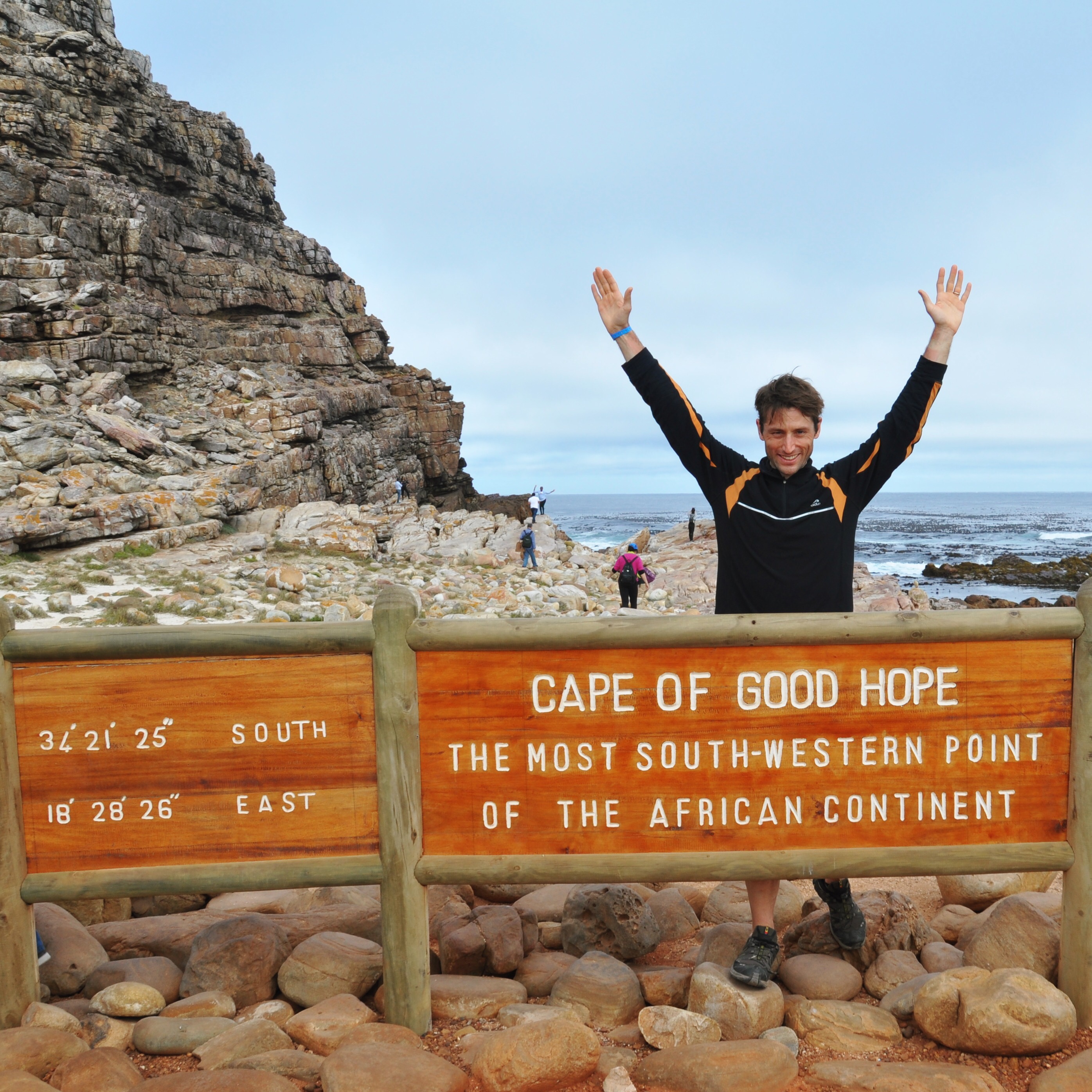 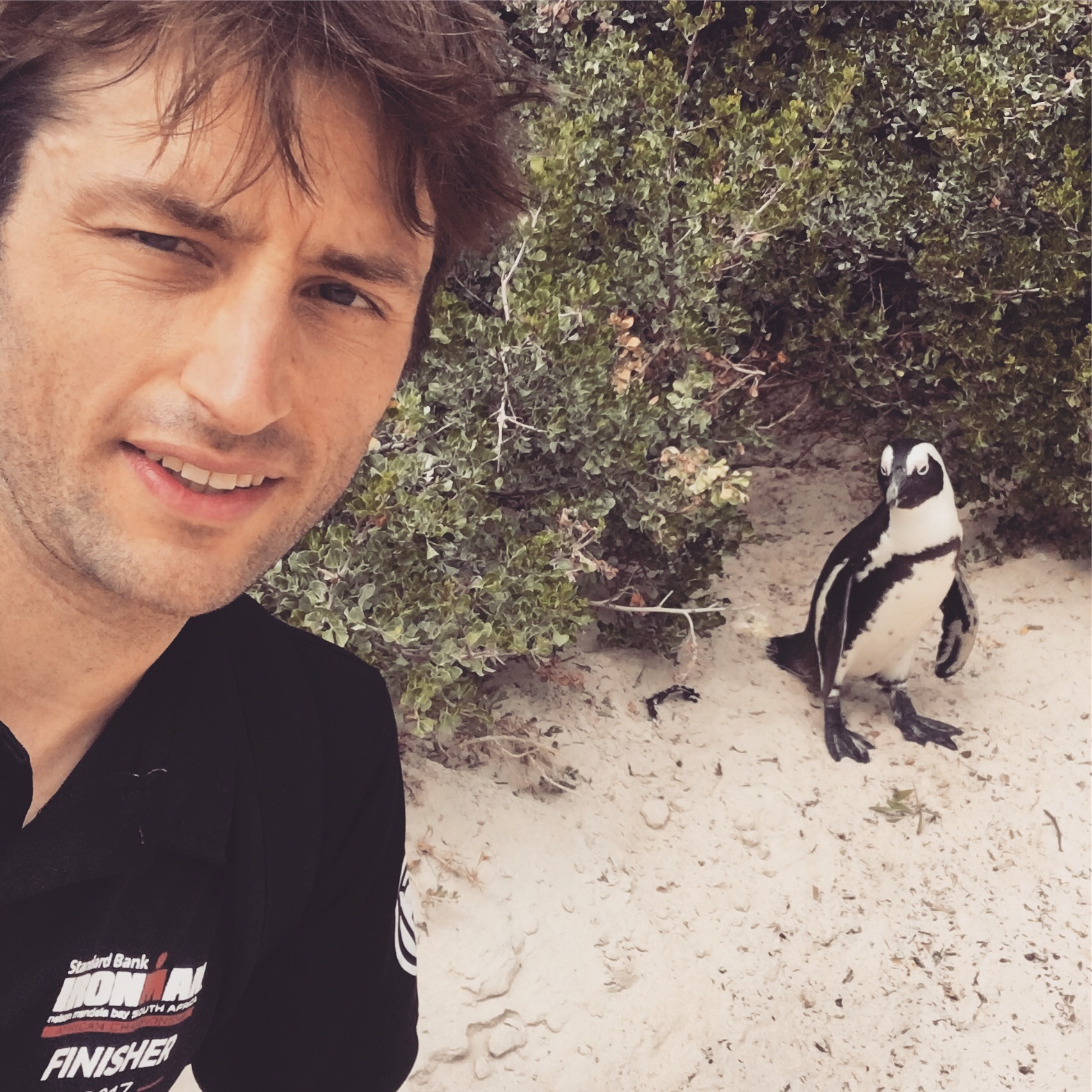 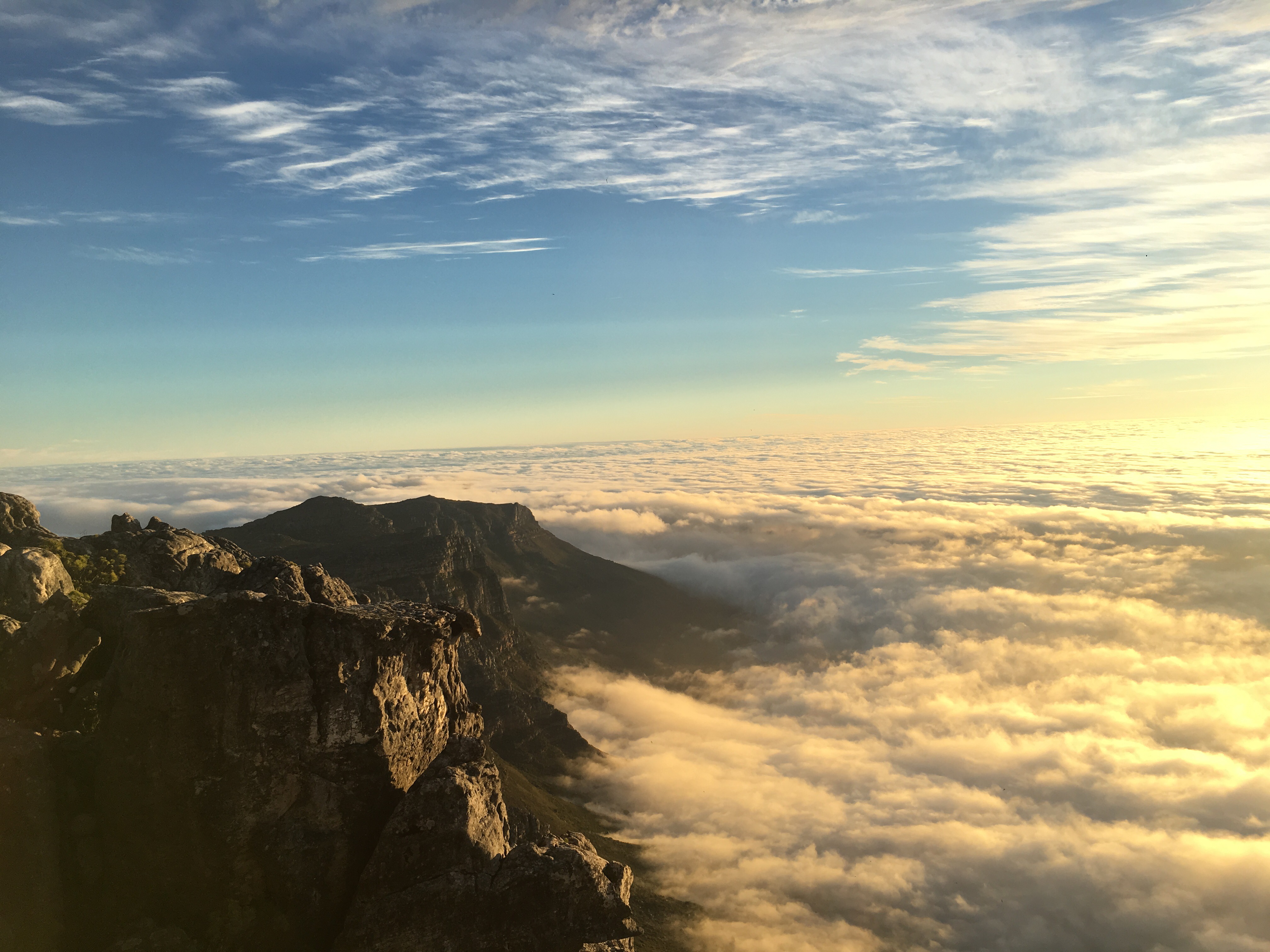