This race had been a rumor for a few years, but in August 2011, was
officially announced ! The inaugural IronMan NYC would take place in
2012 !!! 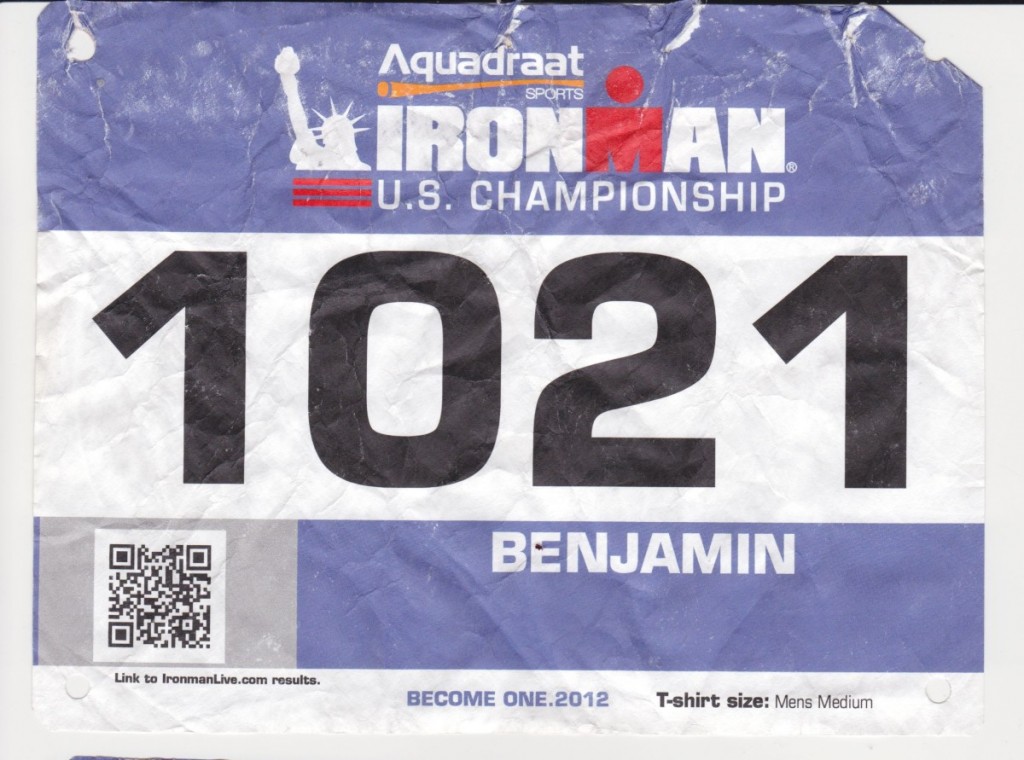 Packet pick-up at the expo. Lots of free goodies (sunglassses !), nice
booths, fun gear for sale (we ended up buying a “healthy sorbet”
machine…), I am positively surprised, because of the years, IM and
Marathon expos tend to be more and more lame. I also get more familiar with
the logistics, since the transition area is more or less only accessible by
ferry only. More on that later.

Pick and gear drop off. I take the afternoon off, given that youy have to
ride with your bike to the pier on 42nd street, take a ferry, drop bike and
run gear as well (not the time to forget something) and a heavy rain storm
is expected… Well, it is actuyally quite fun to take the boat and get a
nice view from the midtown skyline. I make sure my gear bags are “doubled”
to make them “rain proof”, the last thing you want is a pair of soaked
ruynning socks/shoes. The transition area is full of water, but it is quite
fun to be below the GW Bridge, I manage to catch the “one before last” boat
and get my morning stuff ready before going to sleep at 8.30pm… 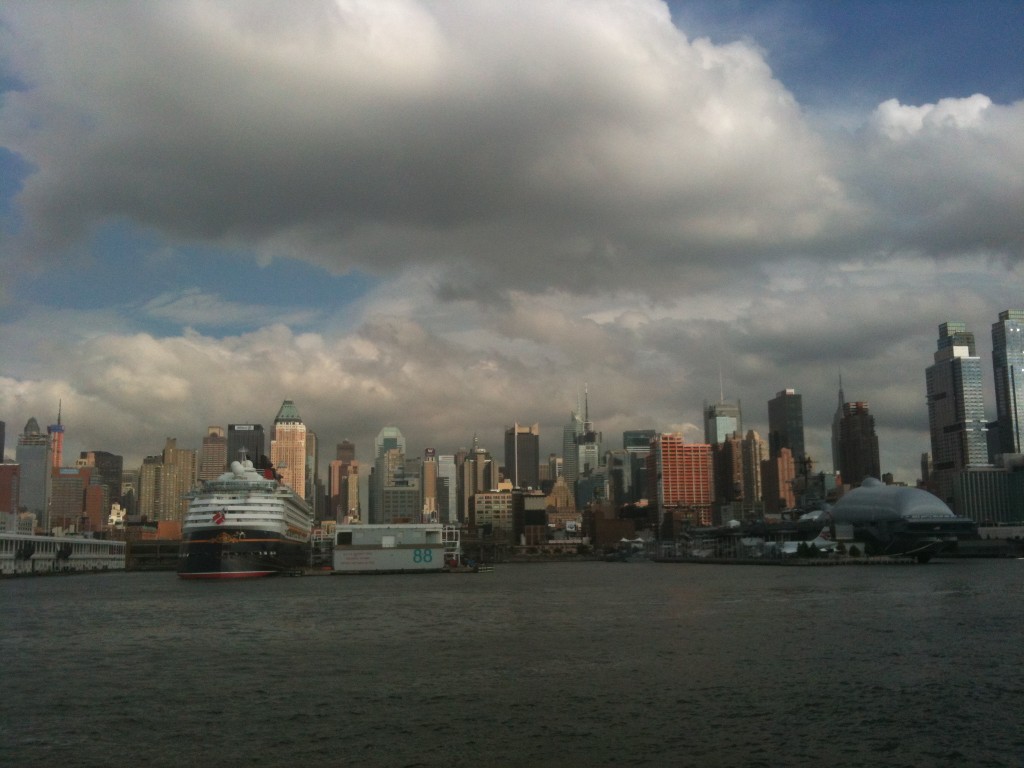 4am, waking up to catch a cab to get the 4.30am ferry… WTF ! I managed to
get a ride with some friends. We have until 6am to get ready (and wait for
the bathrooms…) Before catching a second ferry to reach the “start barge”
2.4 miles north on the river. 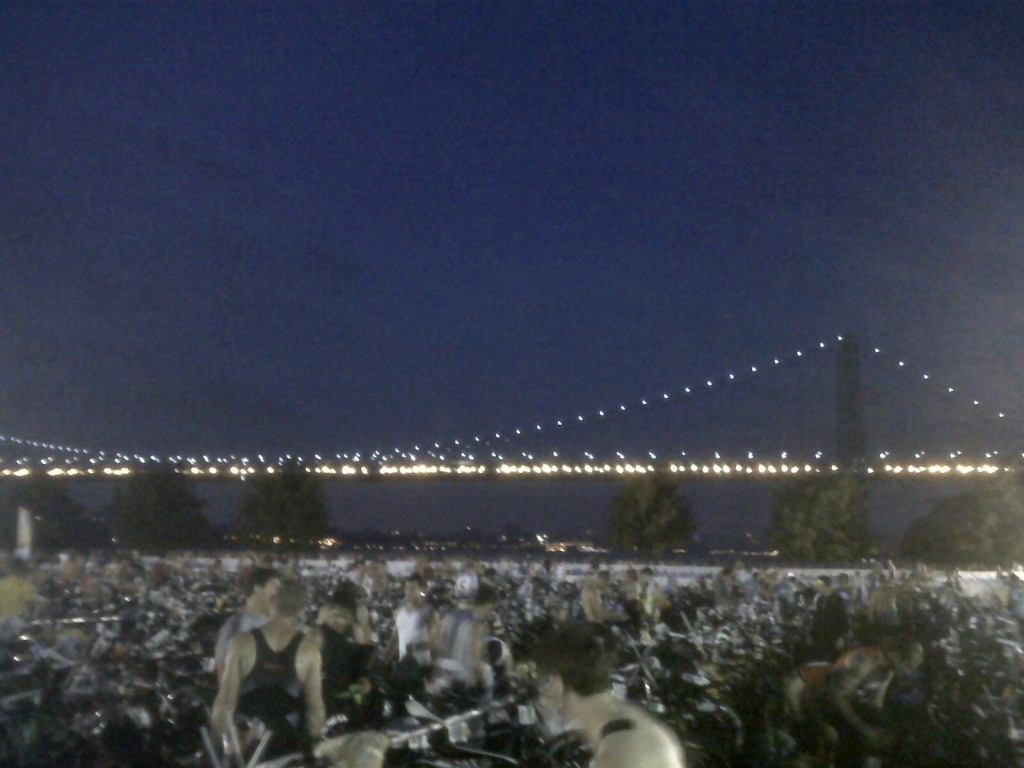 I lose my French buddies but end up on the ferry with all the Terriers. We
will be ferry number 2 for the start, starting around 5 minutes after the
first one – it is a time trial start.

Water is ugly, but the time trial start prevents us from being thrown in
the usual “washing machine” that a mass start represents when you have
2,000 triathletes. Current is picking up quite fast, at some point I
mis-identified a small harbor as the exit and think I am going to swim in
40′ !!! It is not the case, but with the time trial start it is quite easy
to swim, despite the murky water (especially when you’ve swam with tropical
fish and turtles a few months before in Hawaii…). Anyway I exit in 49′
and a friend of mine volunteering at the swim exit is my veryu efficient
“wetsuit peeler”. Good transition (4 minutes) and I start the bike leg to
is going to be hot… It is summer in NYC afterall… 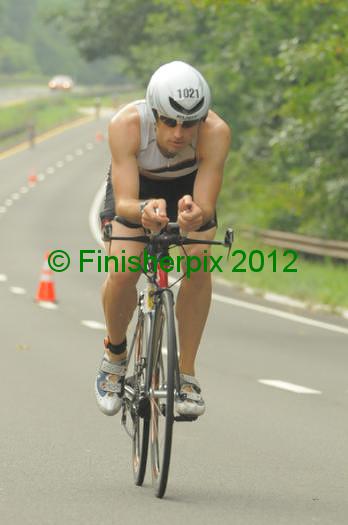 After a few kilometers uphill to go from the shore to the highway, we are
riding on a New Jersey interstate, which as some smooth sections and some
very bumpy ones. We are going to ride two loops, and I want to pace myself
in 5h 20mn to be able to get a good run afterwards. There are some very
fast splits, some others ok, I try not to overdo it but it is actually more
hily than I thought (Florida where are you !!!) and I end up riding harder
than I want. I finish the first loop pretty much in the front of the race
(starting first + good swim + good bike), I allow myself the pleasure to
grab my sandwich in my “special needs bag” – given to me by a buddy ! Good
karma. I feel very good, I start the 2nd loop alone ansd try to catch up
with a rider to get some proper pacing, and even 7 meters behind, it
helps… And I get a red card from the referee ! WTF. No time to argue, I
honestly rode hard alone but it is what it is, so I don’t take any chance
anymore and get a least 50 meters away from any rider in front / behind me.
I know I am going to loose 4 minutes at the penalty tent, so I ride harder
(and also because I am p*ssed off), forget to eat or drink for one hour and
then get back into my race. The second part of the second loop is quite
demanding, with a few long uphill sections, but until km140 I do well. I
get my 4mnb penalty, discuss with the volunteers there, share some jokes
with the pro female joining me, stretch my quads, and off we go for 3 miles
downhill to reach transition. 5:24 on the bike, could have been better but
life is life… 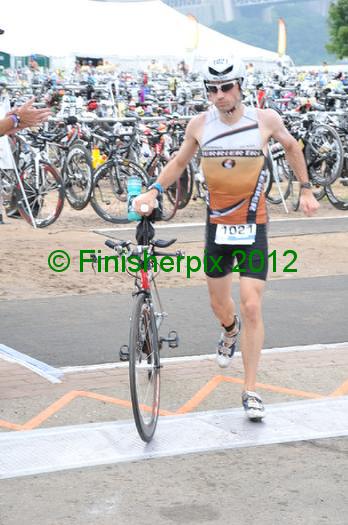 Transition is quite empty (picture above is from T1), a volunteer takes my bike as soon as I dismount
(I love that, I hate finding my spot in the transition area) and off we go,
in the blazing sun, with scorching temperature, for a marathon.

Immediately we have 2kms of steep uphill sections, to reach the Palisades
park in New Jerdey, which is a famous training spot due to its hills… We
are going to run more than 21km there, it is is going to hurt. It is
clearly the most challenging part of the race, and I immedialtely do
everything possible to cool off at each aid stations. Aid stations are
still fully stocked, and I get super good care from the volunteers eager to
help, with ice in my cap every mile, coke at each statio, and m numerous
sponges to top it off. I know I can do under 10 hours if I manage to stay
regular in my splits… But the 10k loop on the Palisades under the heat is
very demanding and as I start my 2nd loop, I know it is going to be tough.

On the 2nd loop, there are now more runners and I need to be focused in
order to maintain my pace as most of them are “slower” athletes, and you
tend to mimick the pace of other athletes around you. I get to see lots of
friends, that’s pretty cool, also everybody struggles with the head.

I finish the 2nd loop and can now “go through” at the turn-around point to
get to the bridge, leave New Jersey and reach Manhattan. The two miles up
are definitely the toughest, as there is no shade and it is really steep. I
don’t manage to head anymore and stock up on water and ice before climbing
the stairs (!!!) at the bottom of the bridge. They have lots of volunteers
on these stairs, fearing athletes might fall. 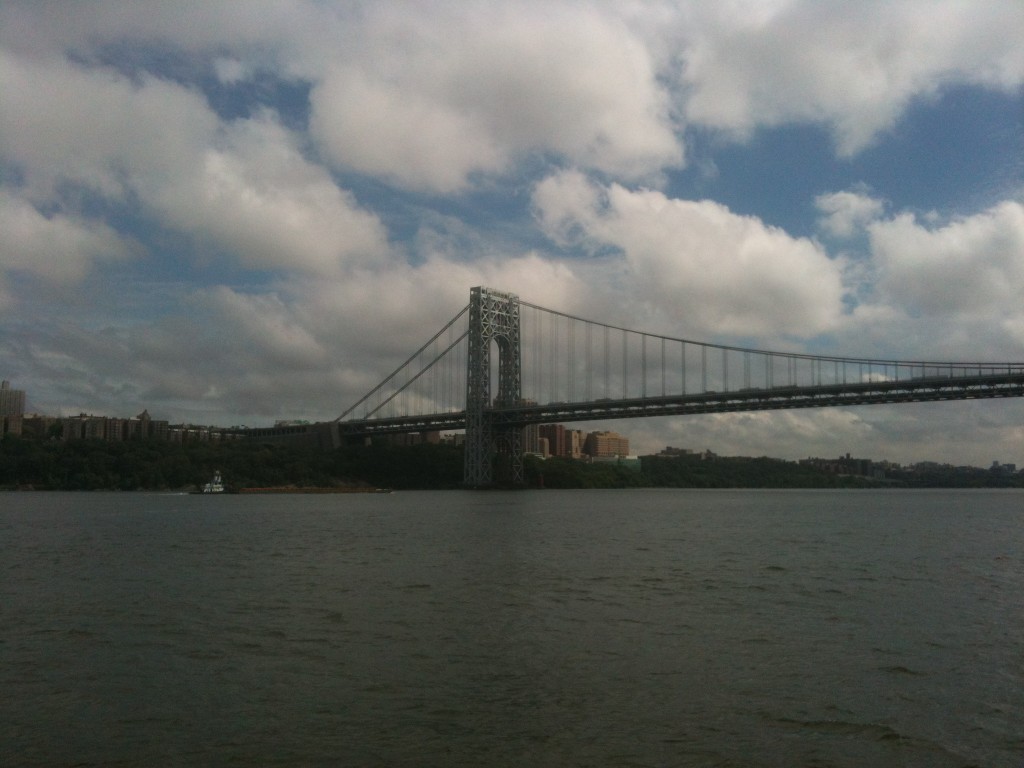 At this point, I am pretty much alone, with one runner maybe 400m in front
of me, and one behind at pretty much the same distance. I feel almost alone
on the bridge, which is compounded by the fact that there is no spectator
allowed there.

No shade, no station, the bridge is tough, even flat ! I lost precious
minutes on the climb and know it is going to be tough to break 10 hours.
But I also believe I can power up through Manhattan which is flat along the
river, with – I hope – plenty of spectators.

Down the bridge, lots of cheering, and 1 km downhill, I pass a pro who is
obviously suffering with the heat. I reach Riverside park, with New Yorkers
casually strolling along the river. Some are even barbecueing ! But I can’t
really eat, so I triy not to slow down…

Aid stations are like oasis. Volunteers haven’t seen a lot of runners, so
the “service” is top-notch. I allow myself to walk at each of them,
drinking as much Coke as I can. But I need to get moving and I struggle to
keep my target pace, I lose ground at each mile. I know I can’t make it. 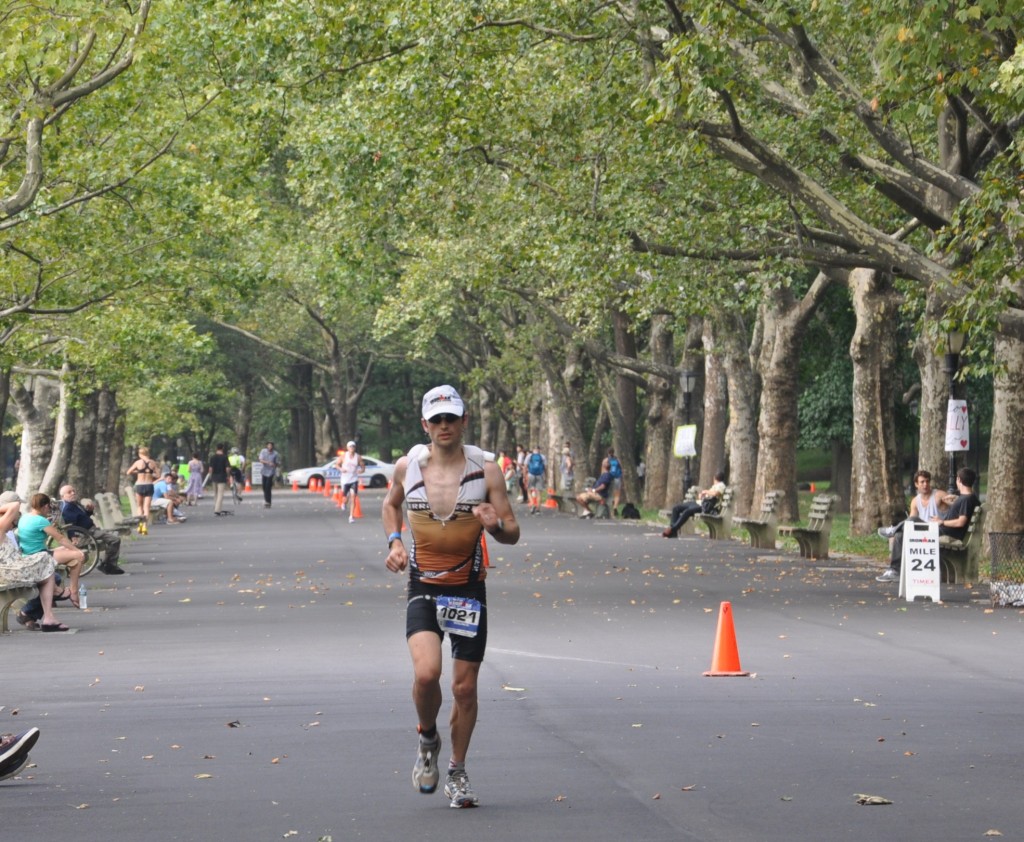 Across the highway, I see Cecile and Thibault, which means the end is near,
four out-and-backs on Riverside where I’ll see them several time, and where
the tent of my club is set-up. Lots of people are sitting at cafes or on
benches, it is really nice, I manage to pick-up the pace. I pass twice
“through” the Terrier tent where the is some real cheering happening (Billy
passed there first, and will end up qualifying for Kona). 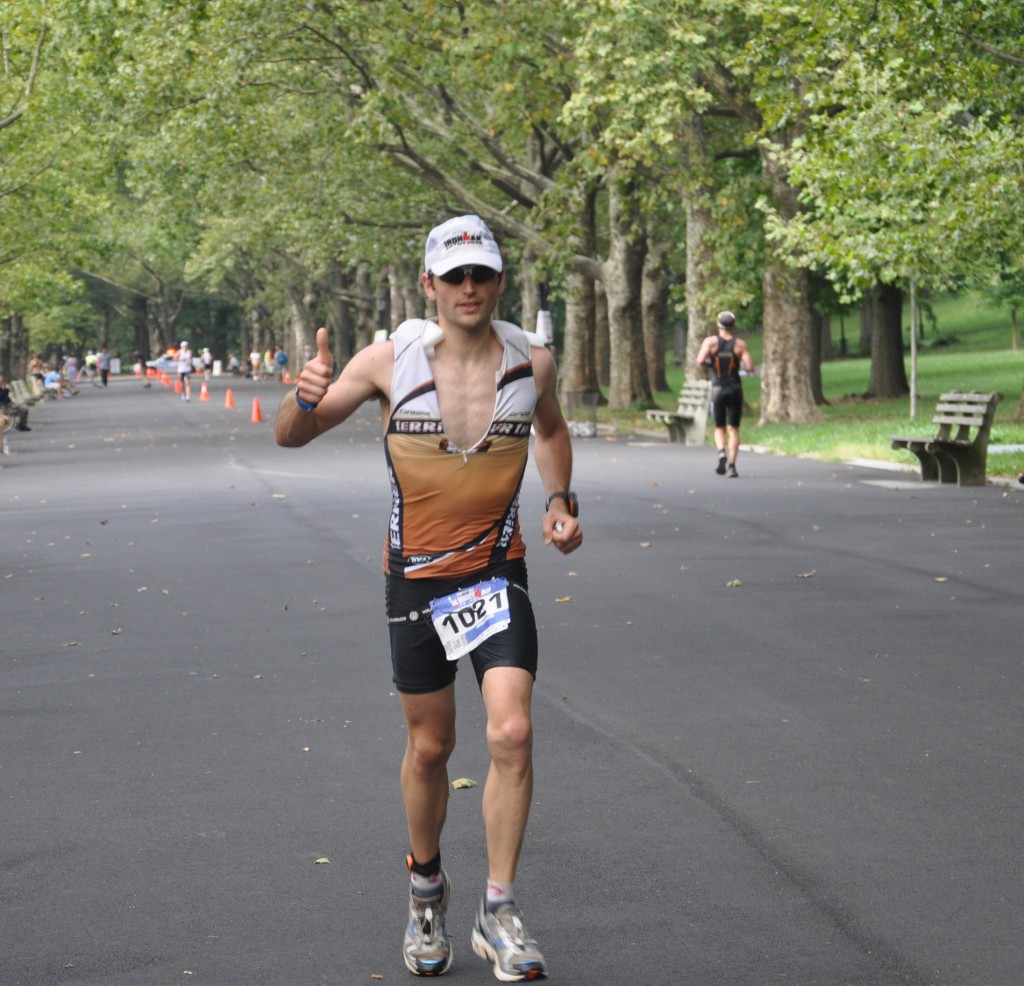 Then it is almost a home streth, no stopping along the water, I see
Christine and Dominique with Timi, we take picture (the 10-hour and the
qualif are long gone anyway) and I get from Nike Reilly my “Benjamin
Kieffer, you are an Ironman” ! 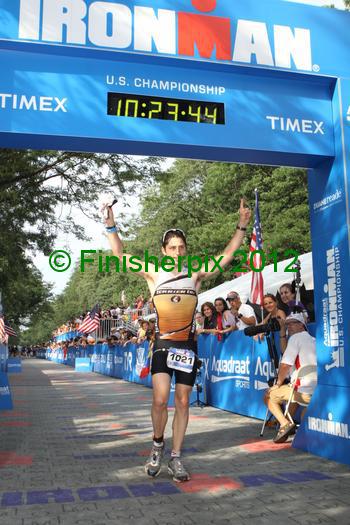 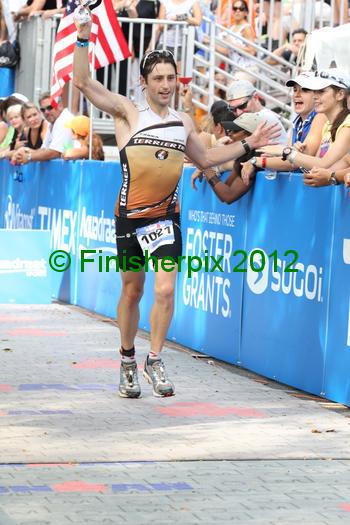 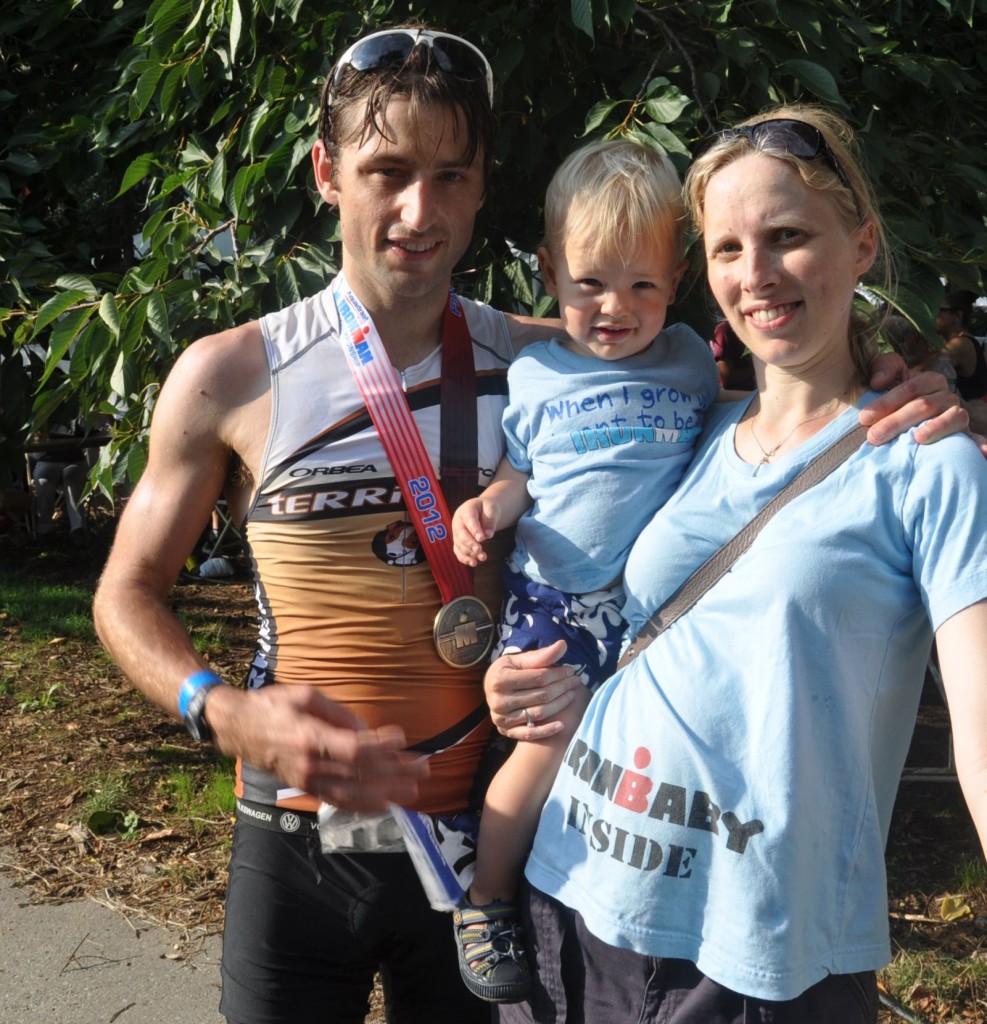 Overall the race was tough because of the heat (but what could we expect
with August in NYC, the tough run being not really offset by the swim when
you look at pro times). The course was critized a lot, but the GE Bridge
was really iconic and a challenge, and while there were not plenty of
spectators, the volunteers were awesome and also – WE RACED AN IRONMAN In
NEW-YORK CITY !!!

Obviously the logistics were a pain in the neck (I got my bike and my gear
in a plastic bag the next day, with an odor you don’t want to know about),
I think the main problem was that spectators could not go to the transition
and the swim start (unless being stuck there), but living in the City, I
will always be glad I ran it !