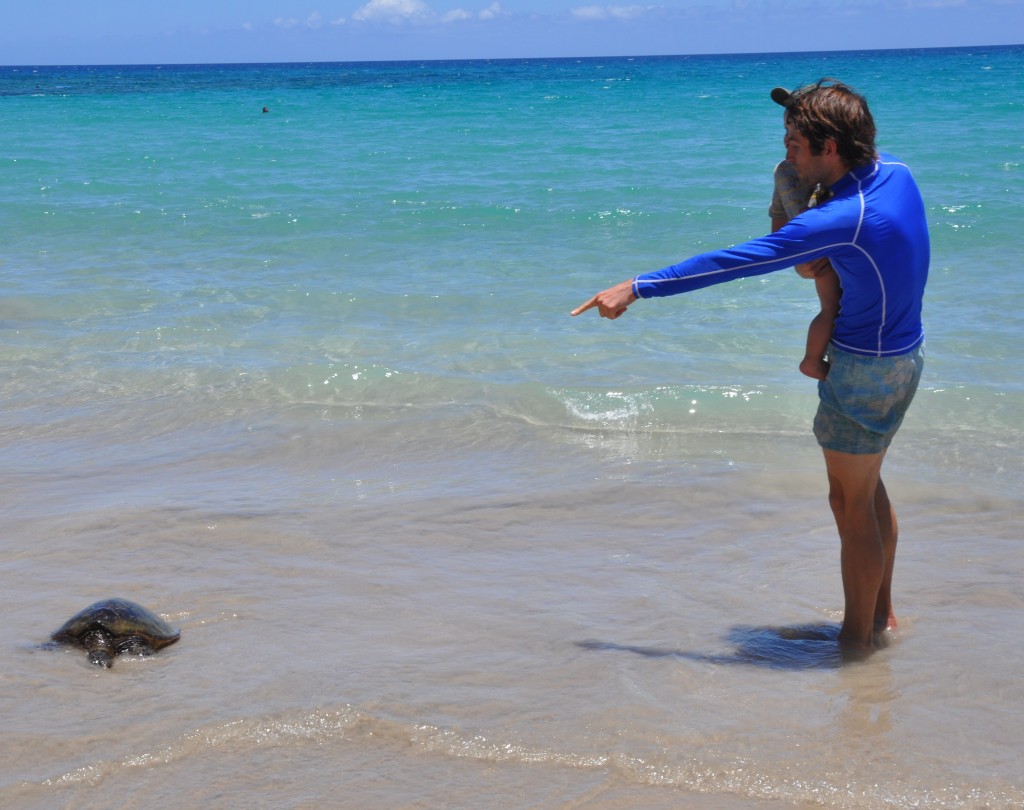 Some incredible open-water swims and nice spots on the “Road to Hana”. 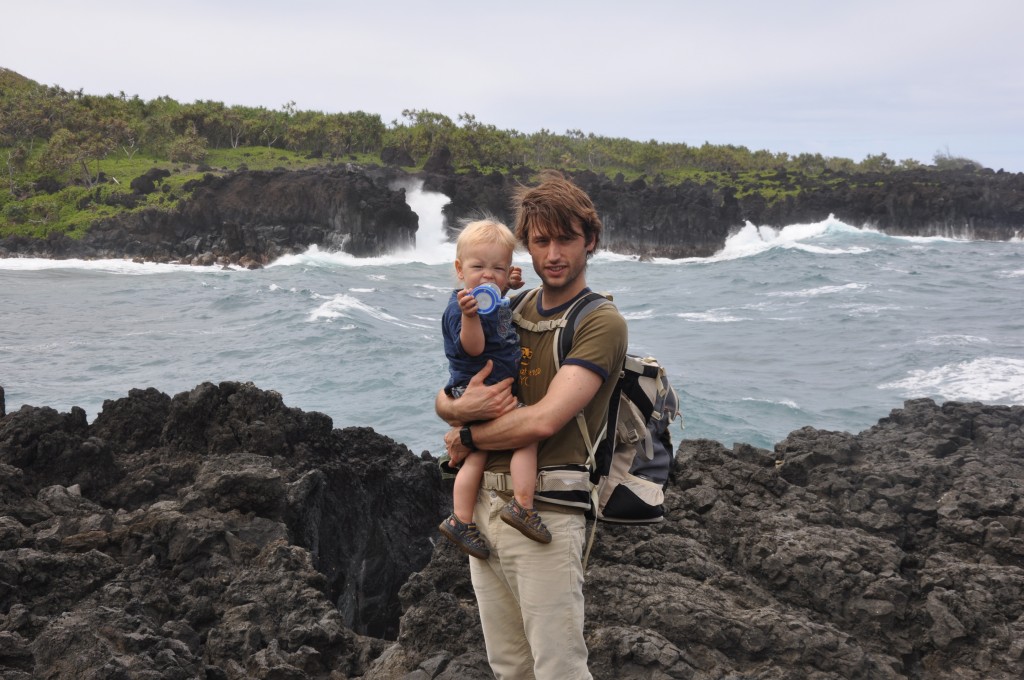 Off to the Big Island.

We landed in Kona, rented a 4×4, and reached our hotel which was also the “official” host of the race, allowing for easy logistics. The Fairmont Orchid is 40mn north of Kona, surrounded by very nice beaches. Expensive but really a nice place. The road from Kona to the hotel is the feared “Queen K Highway”, and I got a glimpse of what was waiting for us on race day. Also, it was quite impressive to finally see this landscape “for real” !

I had sent my bike via UPS to the local bike shop that had set up a satellite at the hotel for  race week, but when I showed up, they had not received it yet ! Cr+p ! In fact the hotel had stored the box in a locker room qwithout telling them, but once found the mechanics promised to get it done by 6pm. In the meantime, I get my bib and visit the small expo, with lots of goodies. 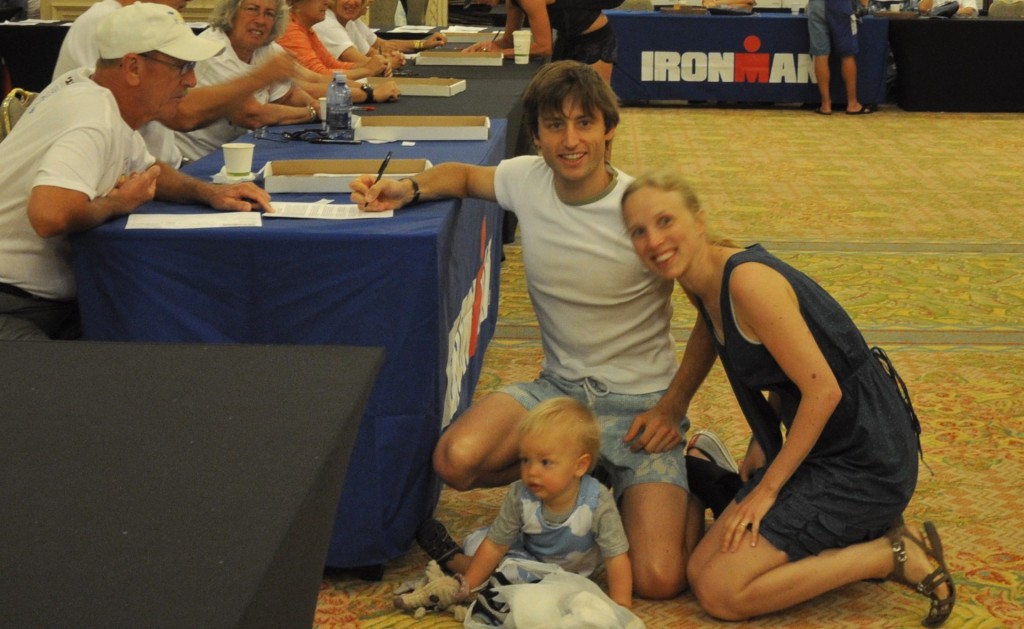 Next day is bike drop off. We have to ride 10k to the transition area, wind is very intense, tomorrow is going to be tough on the bike. Actually the race organiser will mention later at the briefing that it “race day is going to be a windy day”.

Lance Amstrong’s bike is already there, and everybody is quite excited to see him race here. He will end up crushing the bike and winning the race. Race day. We leave early by bus, and have ample time to get ready. The water is beautiful, warming up is a pleasure. Wetsuits are not allowed (I spot a few cheaters) and everybody wants to catch a glimpse of Lance. Pros
start 5mn before us, and then off we go on a mass start where us in front are waist-deep in the water.

I start very well, not taking too many hits, the water is super clear and there are some many fish ! The first buoy is a mess as usual, and then I get a little isolated and can’t rally find a group. I finally draft a few guys but with the sun in our face we start going back at the wrong buoy ! A kayaker ands us back, and at the last turnaround I spot a giant green turtle looking at us from the bottom !

I exit in 32mn (my target was 30mn), quite bad but I had no wetsuit, transition in 3mn, and take time to put on white arm coolers and tons of sunscreen to protect myself from the scoarching sun. 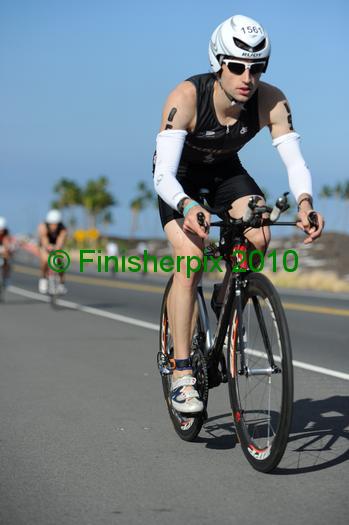 5kms wind in the back (easy !) And off we go for 45km on the Queen K with
wind in our face. While I know the course thanks to my computrainer, it is
impossible to imagine the intensity of the wind… The first half is uphill
on our way to Hawi and I sometimes cannot believe how slow I am. Most of us
struggle to stay in the aerobars on the sections right on the shore, and I
spend at last 20% of the time on my drops, unable to control the bike on
the aerobars. 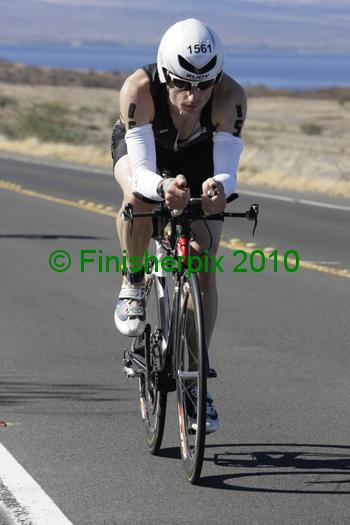 We see Lance coming back, powering through the queen K., with a massive
lead on Lieto. The course is beautiful, after lava fields we are welcomed
by green pastures on the climb before the turnaround. When I see my split
time halfway, I cannot believe how slow I am. And then downhill. 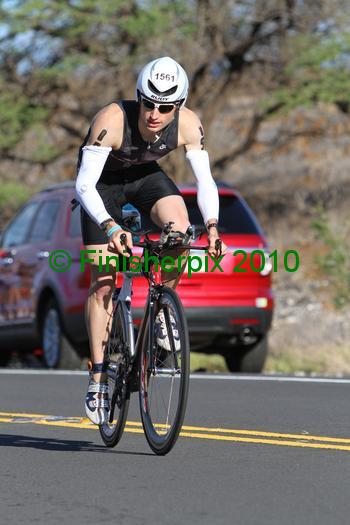 Obviously the mental relief of being downhill with wind in the back is
great, and at close to 45 miles an hour, I cannot allow myself to be on the
aerobars, wind bursts can move you 2 meters on the right, closer to the
water. Scary !

I make some time back, and I see all participants that are still climbing
totally hurting, so I feel much better 😉 I power up through the end,
reaching T2 in 2h37mn. Quick transition, I put a sunscreen mini-dispenser
in my tri-top given that it is HOT, and off for the run. Goal is 1h30mn. 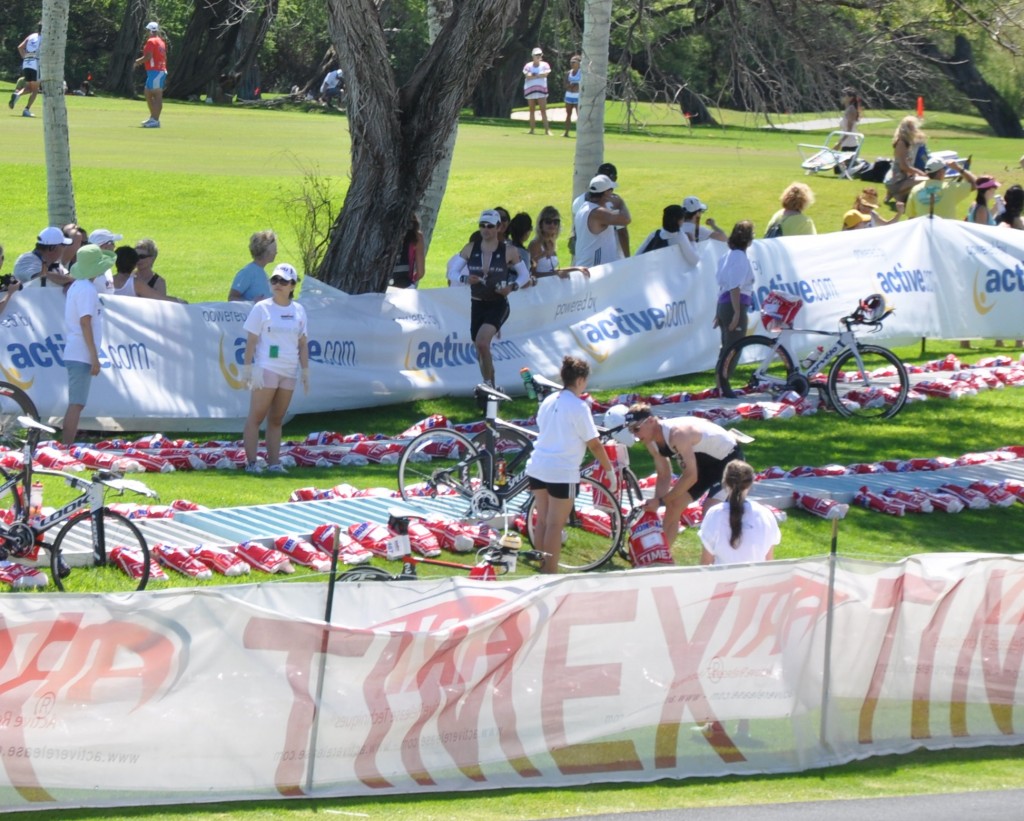 Some sections are on the grass, where it is relatively cool, some are
between lava rocks, where heat is intense. I try to stick to my target pace
of 6.50 per mile / 4.15 per km, it kind of work except when we have the
wind in our face. Aid stations are good, I drink onbly Coke and cool off
with ice, and I believe that nobody passes my until km 15. 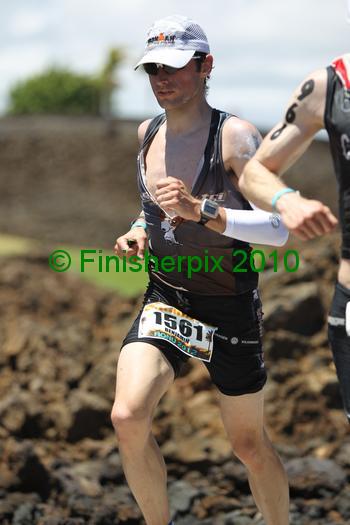 Then there is a long out-and-back in the lava fields, find in the face, I
fade… One guy passes me, I try to hang tight. This section won’t end…
and at the turnaround I pass 2 pro females struggling with the heat. I
already used all my sunscreen lotion, and I am glad I took it ! 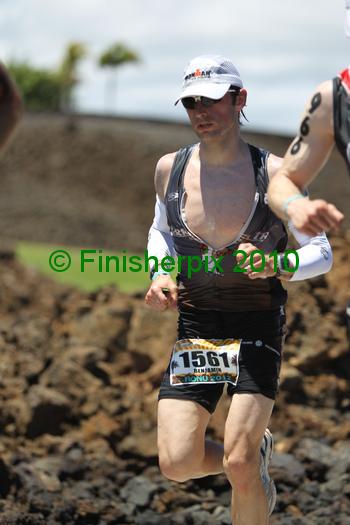 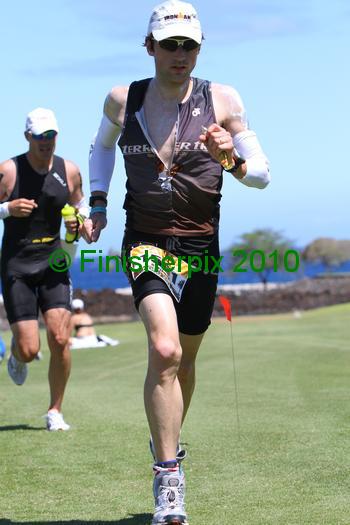 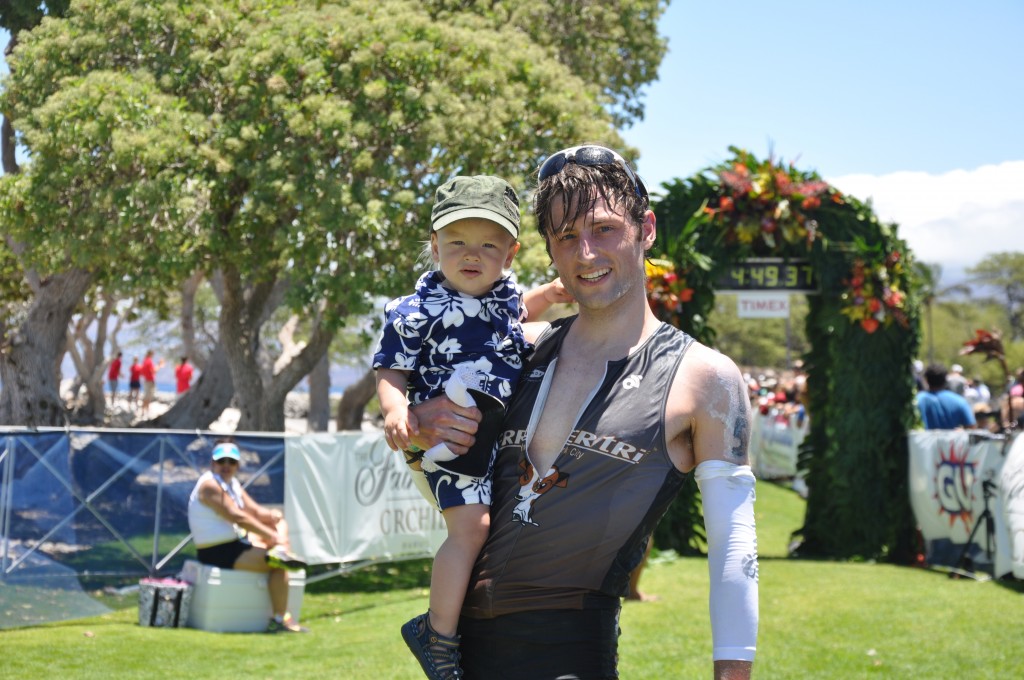 We spend the rest of our stay touring around the island, diving with rays,
before leaving from Hilo.

A few days there offered us some great hikes, cool beaches, and some rest… 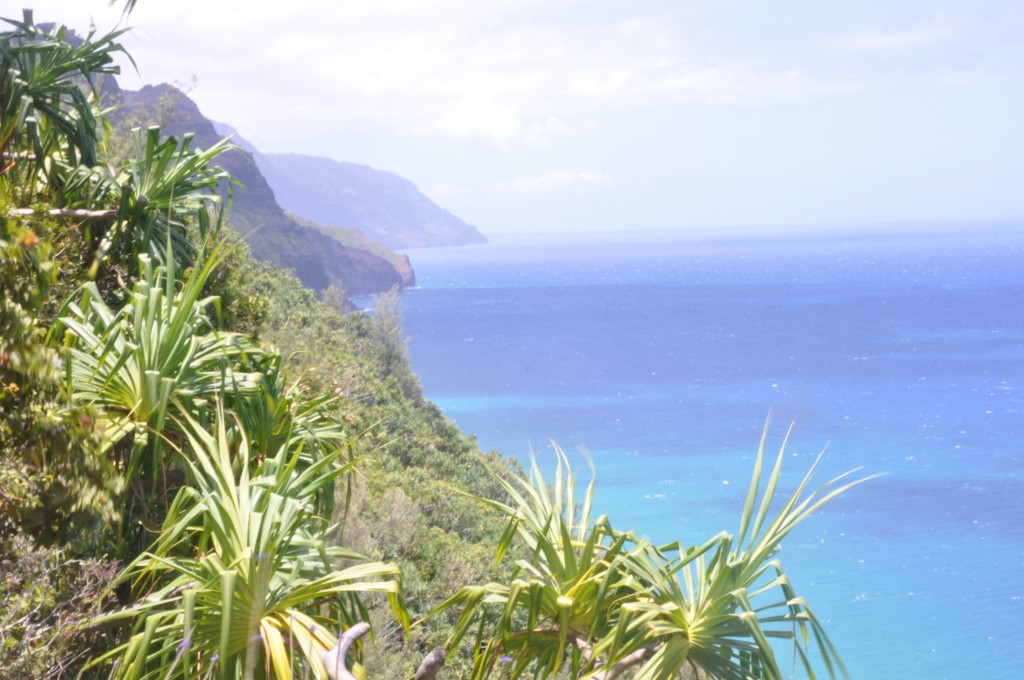